Join us today for an episode about the reason Job is about faith... 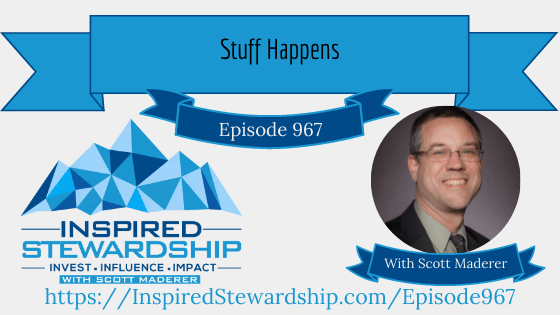 In today’s spiritual foundation episode about developing your influence, I talk with you about Job 1: 1 – Job 2:1 – 10.  I talk about why faith isn’t about stuff not happening but about what happens when stuff happens.  I also share with you why Job isn’t a tale about punishment, but about faith...

[00:00:05] Jeff Brown: I'm Jeff Brown from the read to lead podcast, challenging you to reach true success in business and in life through consistent and intentional reading. And one way to be inspired to success is to listen to this, the inspired stewardship podcast with my friend, Scott.

[00:00:21] Scott Maderer: being free from pain. This is a detail of punishment, but rather. Recognizing that we all have moments of suffering. We all have moments of pain, and faith is about hanging onto that relationship with God, even when that happens. Welcome. And thank you for joining us on the inspired stewardship podcasts.

[00:00:48] If you truly desire to become the person who God wants you to be, then you must learn to use your time, your talent and your treasure. For your true column in the inspired [00:01:00] stewardship podcast, we'll learn to invest in yourself, invest in others and develop your influence so that you can impact the world.

[00:01:10] And today's spiritual foundation episode about developing your influence. I talk with you about job chapter one, verse one, and job chapter two verses one through three. I talk about why faith isn't about stuff not happening, but about what happens when stuff happens. Also share with you why job isn't a tale about punishment, but rather one about faith job chapter one verse one says there once was a man in the land of Uz, whose name was job.

[00:01:42] That man was blameless and upright one who feared God and turned away from him. And it's picking up in chapter two, verse one, it says one day the heavenly beings came to present themselves before the Lord. And Satan also came among them to present himself before the Lord. The Lord said to Satan, [00:02:00] where have you come from?

[00:02:01] And Satan answered the Lord from going to and fro on the earth. And from walking up and down on it, the Lord said to him, Have you considered my servant job? There is no one like him on the earth, a blameless and upright man who fears God and turns away from evil. He still persist in his integrity.

[00:02:18] Although you incited me against him to destroy him for no reason, then Satan answered the Lord skin for. All that people have, they will give to save their lives, but stretch out your hand now and touch his bone in his flesh. And he will curse you to your face. The Lord said to say very well. He is in your power.

[00:02:36] Only spare. So Satan went out from the presence of the Lord and inflicted loath them sores on job from the soles of his foot to the crown of his head job, took a pot shirt with which to scrape himself and sat among the ashes that his wife said to him. Do you still persist in your integrity, curse God and die, but he said to her, you speak as any foolish woman would speak.

[00:02:58] Shall we receive the good at the hand [00:03:00] of God and not receive the bad in all of this job did not sin with his lips. One of my friends says that the shortest sermon ever written is simply stuff happens. Maybe stuff happens. Amen. Now I realized that's not a satisfactory sermon. And yet the truth is there's a lot about faith and Pieology captured in those two words, stuff happens and the truth is.

[00:03:32] Stuff does happen. If we think about that passage from the book of job, it actually says that stuff happens. That's what that passage is talking about. And the truth is that the scholars will tell you that this book is at least gone through at least three or four different stages. And there has been some text added and some other parts middle in the middle section it's been expanded upon, but [00:04:00] this is a poetic dialogue that basically.

[00:04:05] Is designed to talk about how the characters of this story and how these things are related to human suffering and to faith. Why does that matter? The truth is that the purpose about the story isn't necessarily to capture some historical event, but rather to relate. To us, what is going on in the world and our relationship with the things that happen.

[00:04:35] It's wrestling with some of those deeper questions, some of the deeper truths of life. And in this beginning of this story and chapter one, it says that. This young man, this gentleman, this job is a man of great faith. He's a perfect follower of God. And I think right there, it explains that's [00:05:00] probably not a true statement because there's no one in the world that is blameless and upright.

[00:05:06] Who's turned away from all evil. We're all fallen and sinners in some way. No ones really. That. And so it's not trying to say that God ply placed ice with the universe or that we're being set up to fail. Instead it's a parable or a fairy tale or a story about something so that we can begin to understand a deeper meaning human.

[00:05:33] I have blame. We have sin, we have problems, and yet we strive to be upright. We strive to be blameless. And even if we could achieve such a state of perfection, this book is saying that we would not be immune from suffering. That bad things would still potentially happen to us. Random stuff would happen.

[00:05:57] We might get sick. We have an unforeseen [00:06:00] accident. Something could have. And yet you'll hear from people all the time that if you had enough faith that nothing bad will happen to you, that somehow faith will create this magical force field around you to keep things out that are bad. And that's why a lot of times when people have bad stuff happen it hits them in their faith because that feels like God's not keeping up their end of the bargain.

[00:06:25] Why should I keep up my. But the problem is there was never that bargain in the first place. We are promised an easy path. We are promised a path of perfection. We aren't promised that if we have faith, we will be protected from every where. And at first glance you may say yes, but this passage, it's not random stuff happening.

[00:06:48] This involves Satan. This involves the adverse. At first off that word, Satan in this case is the Satan and it really should be spot-on with [00:07:00] a, an, a sound. And it isn't like the adversary of God, but it's somebody who holds an office in the heavenly court. In this case, they are set up in opposition, not to God, but to us, you can almost think about it as.

[00:07:18] The prosecuting attorney in this relationship, and God is the defense attorney, what it starts out and says, where have you been? He says going to and fro from earth going here or there just letting stuff happen and creating random events. It's not really in opposition to God. In fact, God is a participant in this conversation and at the very least is allowing what's happening to happen.

[00:07:45] If not being somewhat. And at that point, it starts to feel like, wait a minute, God's setting us up for pain. And the answer is no, not really, but the truth is suffering is going to [00:08:00] happen anyway. And faith is not about freedom from suffering there. Isn't this bumper sticker faith here. This isn't the prosperity gospel.

[00:08:43] What's just going on in the day to day. Is what this really is about. It's not about faith protecting us from harm. It's not about being free from pain. This isn't a tale of punishment, but rather of [00:09:00] recognizing that we all have moments of suffering, we all have moments of pain, and faith is about hanging onto that relationship with God, even when that happens.

[00:09:15] Thanks so much for listening to the inspired stewardship podcast as a subscriber and listener, we challenge you to not just sit back and passively listen, but act on what you've heard and find a way to live your calling. If you enjoyed this episode, do me a favor. Go over to facebook.com/inspired Stuart.

[00:09:41] And like our Facebook page and market that you'd like to get notifications from us so that we can connect with you on Facebook and make sure that we're serving you to the best of our abilities with time and tips there until next [00:10:00] time, invest your time. Your talent and your treasures develop your influence and impact the world.

There was once a man in the land of Uz whose name was Job. That man was blameless and upright, one who feared God and turned away from evil.  - Job 1: 1