Join us today for an episode about the stress of Cognitive Dissonance and how it affects your productivity...

Today's episode is focused on why being out of mental alignment always has a productivity impact... 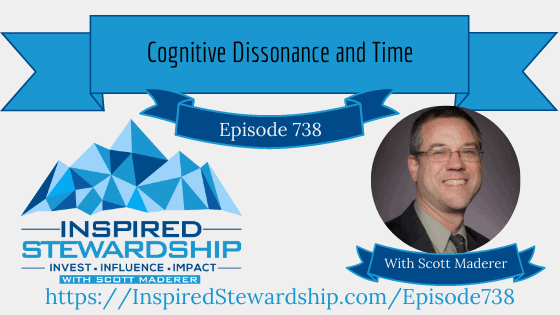 In today’s episode about investing in yourself by stewarding your time, I talk with you about what cognitive dissonance is.  I share why it affects your productivity at work and at home.  And I share some tips on what you can do about it.

00:00:00 Thanks for joining me on episode seven 30, eight of the inspired stewardship podcast. I'm Doug North and I'm Carol Pitner. And we're the authors of raising your money savvy family for next generation financial independence. And we challenge you to really focus on becoming my new savvy. One way to be inspired to do that is to listen to this, the inspired stewardship podcast with my friend,
00:00:25 Scott Mader,

When dissonance is present, in addition to trying to reduce it, the person will actively avoid situations and information which would likely increase the dissonance. - Leon Festinger