Episode 1262: The Message from the Cross

Join us today for an episode about the meaning of the message of the cross... 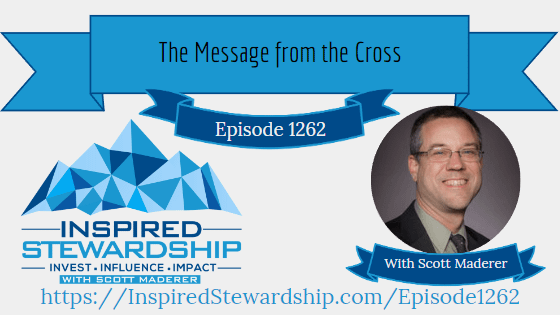 In today’s spiritual foundation episode about investing in others, I talk with you about Luke 23: 33-43.  I share with you how the words from the cross speak to all of us an invitation. I also talk with you about how paradise isn’t about a place but a relationship.

Episode 1262: The Message from the Cross

[00:00:06] Julie Tofilon: I'm Julie Tofilon. I challenge you to invest in yourself and others, develop your influence and impact the world by using your time, talent, and treasures to live out your calling. Having the ability to communicate and build relationships is vital and one inspirational way to develop.

[00:00:27] Is to listen to this, the Inspired Stewardship podcast with my friend Scott Maderer.

[00:01:07] If you truly desire to become the person who God wants you to be, then you must learn to use your. Your talent and your treasures for your true calling. In the Inspired Stewardship podcast, you will learn to invest in yourself, invest in others, and develop your influence so that you can impact the world.

[00:01:29] In today's spiritual foundation episode about investing in others, I talk with you about Luke Chapter 23 verses 33 4 through 43. I share with you how the words from the cross speak to all of us, an invitation, and I also talk with you about how paradise isn't about a place but a relationship. Luke chapter 23, verses 33 through 43 says when they came to the place that is called the.

[00:01:56] They crucified Jesus there with the criminals, one on [00:02:00] his right and one on his left. Then Jesus said, Father, forgive them for they do not know what they are doing, and they cast lots to divide his clothing. And the people stood by watching, but the leaders scoffed at him saying He saved others, Let him save himself.

[00:02:15] If he is the Messiah of God, the chosen one, the soldiers also mocked him coming up and offering him sour wine and. If you are the king of the Jews, save yourself. There was also an inscription over him. This is the king of the Jews. One of the criminals who were hanged there, kept writing him and saying, Are you not the Messiah?

[00:02:37] Save yourself and us. But the other rebuked him, saying, Do you not fear God since you are under the same sentence of condemnation? And we indeed have been condemned justly. We are getting what we deserve for our deeds. But this man has done nothing. Then he said, Jesus, remember me when you come into your kingdom.

[00:03:04] There's a lot of evidence that these words, From this passage, we're not originally in the first versions of the gospel. Some of the oldest manuscripts that have this gospel in it don't have these words, and because of that, many people believe that this was a later edition that maybe this later edition was used to ease the blame from Rome so that Christians wouldn't seem like such a threat to the empire.

[00:03:34] Or maybe it was an addition. To avoid and soften some of the centuries of anti manism that was growing up in the church to, to try to take away some of that feeling of blame on the Jews that was being used by Christians in very negative ways. And you could argue about whether or not either of these purposes would be served by these words and [00:04:00] how effective they've been.

[00:04:26] We're overhearing a conversation between Jesus and God, or a prayer between Jesus and God. And if you think. We strive in today's age and in the days of Jesus to be creatures of knowledge. We like to believe that we understand the world. We understand things, we know how things operate. Our knowledge is a huge point of pride and power for us as human beings.

[00:04:54] And yet the truth is when push comes to shove. We really don't [00:05:00] know what we're doing when life bumps up against death, When meaning, and salvation and love reaches out to embrace us, we often fumble and make mistakes and push it away. Things like the story of the Prodigal Son illustrate this how we push away and we run away from parental authority, from love from kind.

[00:05:27] And then when we come to ourself, that's what it says in the story of the prodigal son. We return back to that beginning father, forgive them. They don't know what they do. Jesus came some argue to show us God, and in showing us God, he showed us ourselves. Jesus came in part so that we would begin to really know what we are doing and what we were.

[00:06:21] They're like, Walk away. Jesus. Save your own skin. Prove that you have power. Do something that we would do in your place. I understand that selfishness, I understand that desire because I live it out every single day. But living sacrificially, that's the part I don't really underst. It's the dying part that I don't understand.

[00:06:45] It's dying to self, it's dying in the spirit that I don't understand. If Christ had that power and I was in that position and had that power, would I have [00:07:00] done what he did? And I don't think I would. And yet here he is, beginning that moment of death by trying to help us, by saying God, forgive them, heal them, hold them, gather them up, stitch them back together and let them move forward.

[00:07:19] This is part of the function of these words from the cross, saying that even though we say that we want nothing to do with God, we don't want nothing to do with salvation. We just didn't know what we were doing. Again, it doesn't matter whether these words are historically accurate. They seem to illustrate very well the message of Jesus stepping in the gap and trying to build a bridge between us and.

[00:07:53] There were others there that were face to face with Jesus that day. Not the scoffers on the ground, but the [00:08:00] ones on either side the criminals. It's in some interpretations, or you'll see bandits, they, these men might have been more like terrorist in some ways. They were people fighting against the Roman power perhaps.

[00:08:17] And yet one of them says, Show us your power by saving your skin. Oh, and ours too. In that moment of desperation, he goes to self-preservation. And I will be honest, that's probably where I would've gone to it. It's the expected words at that point. But the other criminal, the other terrorists, the other bandit, the other thief, whatever word you want to use, Don't you fear God, we're under this same sentence and we deserve it, but this man did nothing wrong.

[00:09:16] Get us down. Save us. Instead, he says, Remember me when you get where you're going. Remember me? He could have said, Come and get me. Maybe that's even what he meant, but that's not what he said. He said, Remember me. Don't let my entire life be summed up by this moment of death. Remember me. Remember me as one who recognized.

[00:09:41] Remember me as more than just my sinful life. And Jesus turns to him and says, Today you shall be with me in paradise. And at first glance, the word paradise might seem to be the most important word in that sentence. The idea. The idea of [00:10:00] green fields stretching out into forever, this moment of heavenly clouds.

[00:10:07] No more pain and no more suffering. But in my opinion, the word that maybe we should be paying the most attention to is the word today. And it might seem to mean that because Jesus was moments away from death and this criminal was moments from a away from death that's what he means by today.

[00:10:29] But I actually think it means even more immediate than that. It might mean right now, this very. Not within 24 hours, but right now, this moment, this time, you will be with me is what Jesus seems to be saying. Jesus is saying, Because you've recognized me, because you've entered into relationship with me.

[00:10:57] Follow me and today. [00:11:00] You shall be with me in Paradise where two or three are gathered. I will be there. I will be with you till the end of the age. All of these phrases are what Jesus is saying works in coming to him so that you can be in relationship and come to this place of paradise. Not in the future, but in the moment.

[00:11:51] Thanks so much for listening to the Inspired Stewardship Podcast. As a subscriber and listener, we challenge you to [00:12:00] not just sit back and passively listen, but act on what you've heard and find a way to live your calling. If you enjoyed this episode, do me a favor. Go over to facebook.com/inspir.

[00:12:16] Stewardship and like our Facebook page and market that you'd like to get notifications from us so that we can connect with you on Facebook and make sure that we're serving you to the best of our abilities with time and tips there. Until next time, invest your. Your talent and your treasures. Develop your influence and impact the world.

Then Jesus said, "Father, forgive them; for they do not know what they are doing." And they cast lots to divide his clothing. - Luke 23: 34