Join us today for an episode about the lost and found... 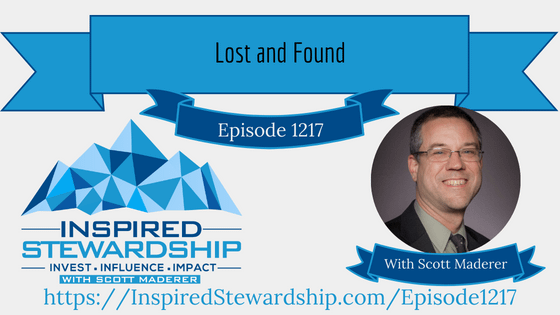 In today’s spiritual foundation episode about investing in yourself, I talk with you about Luke 15:1-10.  I talk about how the stories of the lost serve as a different example for us.  I also share why the celebration is there…

[00:00:07] Brian Russell. I challenge you to invest in yourself, invest in others, develop your influence and impact the world by using your time, your talents and your treasure to live out your calling. Live by faith. Be known by love and be a voice of hope.

[00:00:22] Those are the keys in one way to fuel those, that kind of life is to listen to this. The inspired stewardship podcast with my friend Scott made.

[00:00:33] Scott Maderer: Jesus. However, seems to be suggesting a little bit of a different approach, a different understanding, a different relationship. Jesus says no, go out and seek. That's why these stories are hard words. We're given a job we're given work to do. We're given effort to extend. We're told to go out and find [00:01:00] welcome.

[00:01:00] And thank you for joining us on the inspired stewardship podcast. If you truly desire to become the person who God wants you to be, then you must learn to use your time, your talent and your treasures for your true. In the inspired stewardship podcast who will learn to invest in yourself, invest in others and develop your influence so that you can impact the world.

[00:01:25] In today's spiritual foundation episode about investing in yourself. I talk with you about Luke chapter 15 versus one through 10. I share how these stories of the loss serve as a different example for us. And I also share why the celebration is there. Luke chapter 15 versus one through 10. Now all the tax collectors and sinners were coming near to listen to him and the Pharisees and the scribes were grumbling in saying this fellow welcomes sinners and eats with them.

[00:01:56] So he told them this parable, which one of you having a [00:02:00] hundred sheep and losing one of them does not leave the 99 in the wilderness and go after the one that is lost until he find. When he has found it, he lays it on his shoulder and rejoices. And when he comes home, he calls together his friends and neighbors saying to them, rejoice with me for I've found my sheep.

[00:02:17] That was lost. Just so I tell you, there will be more joy in heaven, over one sinner who repents than over 99 righteous persons who need no repentance or what woman having 10 silver coins. If she loses one of them does not light a lamp, sweep the house and search carefully until she finds. And when she has found it, she calls together her friends and neighbors saying rejoice with me for, I have found the coin that I had lost.

[00:02:44] Just so I tell you, there is joy in the presence of the angels of God, over one sinner who repents. I think, again, this is one of those passages that a lot of times we've heard before this idea of the lost sheep and the lost coin [00:03:00] and the truth is I. This sort of parable often becomes something that we hear and we lose track of what it might mean.

[00:03:57] And in response, Jesus tells [00:04:00] a story. He tells a couple of stories actually. There's actually three in this section, but in this particular set of passages, we're talking about the first. He gathers the crowd and he begins to talk to them and you've got a picture. There's probably people along the edges, dropping, waiting for him to say something controversial, waiting for him to drop a hint that he's really doing the wrong things that they think that he has.

[00:04:27] And the first story he says is he says, which one of you having a hundred sheep and losing one of them would leave them. Now let's stop. The truth is, I don't know. Maybe you're not a farmer. Maybe you're not a shepherd. I know I'm not. But my first thought when I read that is, wait a minute. If I've got 99 sheep here that I need to protect, I'm not gonna leave them unprotected and put them at risk to go get the one that got lost.

[00:05:12] And even if you do no assurance that when you get back, the other 99 are still gonna be there and be safe. The next passage he talks about is the lost coin. And here she goes and sweeps the house and finds the. Which is a good idea. And I don't know about you, but I don't like to lose money, even if it's a small amount of money.

[00:05:33] So it makes sort of sense in this case, this definitely makes more sense than going after the one sheep. But her response is to then throw a huge party and invite all of her friends and neighbors over to celebrate the finding of the coin, which seems to me like it's gotta cost more than that coin in the first.

[00:05:53] now. Sure. There's all sorts of things going on. There's probably the 10 coins that they're talking about here were part of her [00:06:00] dowry and these sorts of things. And they're pretty significant on an emotional level as well as just a monetary level. And that may be the reason for the celebration.

[00:06:10] Maybe this represents her entire life savings and this kind of thing, but even still, this huge party of celebration seems. A little excessive, quite frankly. So there's a lot of effort involved in this seeking. There's risk of life and limb to go find the sheep and putting at risk. The other 99 that you've left behind there's effort in lighting a light and sweeping the house and searching diligently for the extra coin and neither the coin nor the sheep actually.

[00:06:47] Wanted to be found in the first place. They're lost. And I think a lot of times whenever something's lost, we think to ourselves it'll find its own way back. It'll let me [00:07:00] know if it wants me to find it. Think about sometimes when we have a friend that we lose track of if they really wanna find me, they will become the default.

[00:07:09] And I think as church members, a lot of times that's evangelical feeling is if people want to be found here we are, we're the church. They know where to find us. They can come to us. Jesus. However, seems to be suggesting a little bit of a different approach, a different understanding, a different relationship.

[00:08:05] We're not going out to condemn or judge and point fingers and say you gotta measure up. Instead when we find we're told to rejoice, this is the truth to this story, that the celebration is that missing piece finds it place back into the. doesn't matter whether the piece was worthy.

[00:08:55] Thanks so much for listening to the inspired stewardship podcast [00:09:00] as a subscriber and listener, we challenge you to not just sit back and passively listen, but act on what you've heard and find a way to live your calling. If you enjoyed this episode, do me a favor. Go over to facebook.com/inspired steward.

[00:09:21] And like our Facebook page and market that you'd like to get notifications from us so that we can connect with you on Facebook and make sure that we're serving you to the best of our abilities with time and tips there until next time invest your. Your talent and your treasures develop your influence and impact the world.