Join us today for an episode about the threads that hold us all together in community... 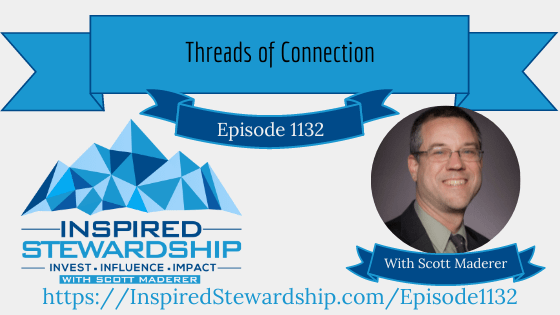 In today’s spiritual foundation episode about impacting the world, I talk with you about Acts 9:36-43.  I talk about how we honor the threads that connect each of us to each other.  I also share how this honors all those in the community that connect to us.

[00:00:07] Mark Herschberg: I'm Mark Herschberg I encourage you to invest in yourself, your organization and others around you to positively impact the world by using your time and your talent to make this world a better place. Having the skills to succeed in your career.

[00:00:22] Your business is key. One way to do this is to listen to the inspired stewardship podcast with my friend, Scott.

[00:00:29] Scott Maderer: because we aren't ever just alone on an island. We're always connected in this thread of connections to our entire community, these threads stretch. And they pulse, they change, they move, they tangle and they break. But all of these things. Are connected. Welcome. And thank you for joining us on the inspired stewardship podcasts.

[00:00:58] If you truly [00:01:00] desire to become the person who God wants you to be, then you must learn to use your time, your talent and your treasures for your true calling in the inspired stewardship podcast, you will learn to invest in yourself, invest in others and develop your. So that you can impact the world.

[00:01:44] Now in Joppa, there was a disciple whose name was Tabitha, which in Greek is Dorcas. She was devoted to good works and acts of charity. At the time she became ill and died when they had washed her. They later in a room upstairs. [00:02:00] Since Lydia was near Joppa, the disciples who heard that Peter was there sent two men to him with the request, please come to us without delay.

[00:02:09] So Peter got up and went with them. And when he arrived, they took him to the room upstairs. All the widows stood beside him, weeping and showing tunics and other clothing that Dorcas had made while she was with them. Peter put all of them outside and then he knelt down and prayed. He turned to the body and said, Tabitha get up.

[00:02:30] Then she opened her eyes and seeing Peter, she sat up, he gave her his hand and helped her up. Then calling the saints and widows. He showed her to be alive. This became known throughout Joppa and many believed in the Lord. Meanwhile, he stayed in Joppa for some time with a certain Simon. No, this is one of those messages that is used a lot.

[00:02:53] It actually shows up on the lectionary for mother's day. And at first glance, [00:03:00] that may be a little odd thinking about this, being the passage of somebody passing and then Peter bringing them back from the dead. And the truth is I think some of this is to illustrate those connections that we have both within family and within community that stretch out beyond us.

[00:03:22] And I don't know about you, but sometimes those connections and those threads and those things get frayed or tangled or even broken. Sometimes we say, and we do things even to those people that we love. Especially to those people that we love that may not have anything really to do with them, but create tangles and messes and pains in those threads of connection.

[00:03:48] And I think that idea of that these threads that bind us to family, to friends and to fellow believers can get so tangled up that we don't even [00:04:00] think straight. It's why when we celebrate holidays, like mother's day and father's day, it can get so tangled up and confused for so many people. My adopted daughter reached out to me because on the mother's day, their church, the message that she heard is that single moms are.

[00:04:41] They would've gone into the foster care system, which isn't a bad thing. But instead someone within their family, her, their aunt stepped forward and said, I will raise these girls. I will be their mother. And in trying to honor mothers, she heard a message of [00:05:00] hurt for her. She heard a message that actually alienated her from her community instead of bringing her in.

[00:05:08] And don't get me wrong. I'm not saying we shouldn't celebrate mothers. And I'm not saying that single moms are more valuable or less valuable than moms who have a father and a husband. And any of those things I'm not even talking about necessarily just moms who are biological. I'm thinking about all of the connections that we have.

[00:05:31] There's nothing wrong with giving people honor for their roles and for the jobs that they do. But at the same time, we have to recognize that sometimes when we do that, it also creates tangles and a mess within people who have a different relationship with those memories, those connections, those threads, because we aren't ever just alone on an island.

[00:05:59] We're [00:06:00] always connected in this thread of connections to our entire company. And these threads stretch and they pulse, they change, they move, they tangle and they break, but all of these things are connected. That the Tabitha in this story was bound to the community as a whole. And she was connected to every.

[00:06:28] The, this town of Zopa on the Mediterranean sea felt deeply hurt. And the community felt the loss. When she was gone, there was a rip in the tapestry of the community and they didn't ask Peter to come and do anything. They just asked him to come because Tabitha was dead. And they had laid her out in the upper room.

[00:06:57] They'd washed her body, but it doesn't actually say [00:07:00] they prepared it for burial. They didn't anoint it. They didn't wrap it. Maybe there was some hope that wasn't the end. And Peter came drawn by the threads of the community. They described how Tabitha, how Dorcas was a servant. A devoted servant. She cared for the church, but also the wider community.

[00:07:22] They called her Dorcas and Dorcas, by the way means gazelle in Greek and Tabitha beans, gazelle and Aramaic though, these two names are actually one name. They call her gazelle and she was a seamstress. She made clothes. That's why there's that scene of them pointing out the clothes that they wore and how wonderful.

[00:07:45] They were. And perhaps Peter smiled seeing their joy for their sister and their friend, this member of their community, this person whose threads were tied to all of them, but then Peter [00:08:00] send them out and he prayed over Tabitha. I don't know what he prayed for, but what happened. Is she rose, she came up, she woke up, she came back to the community.

[00:08:17] Now the truth is that, that joy, that connection I don't think we're often blessed with a true miracle of somebody coming back from the dead though. I will say that I've had some experiences myself and I know others who have as well. Of miracles, things that you truly don't know what the purpose is behind them or how it happened or why it happened.

[00:08:39] But at the end of the day, this miracle is one of showing the connection between the community. And we all have those connections. We all have people that we're connected to. And I want to recognize that when we see that.[00:09:00] And we recognize that sometimes the messages we send to honor can also hurt. I hope that we will extend those threads of community to everyone, especially those who perhaps we've been spending lots of time pushing out of the community and that we can welcome them back with open arms.

[00:09:25] Thanks so much for listening to the inspired stewardship podcast as a subscriber and listener, we challenge you to not just sit back and passively listen, but act on what you've heard and find a way to live your calling. If you enjoy this episode, do me a favor. Go over to facebook.com/inspire.

[00:09:50] Stewardship and like our Facebook page and market that you'd like to get notifications from us so that we can connect with you [00:10:00] on Facebook and make sure that we're serving you to the best of our abilities with time and tips there until next time, invest your time. Your talent and your treasures develop your influence and impact the world.

Peter put all of them outside, and then he knelt down and prayed. He turned to the body and said, "Tabitha, get up." Then she opened her eyes, and seeing Peter, she sat up.- Acts 9:40