Join us today for an episode about the reason we have to bear fruit to live... 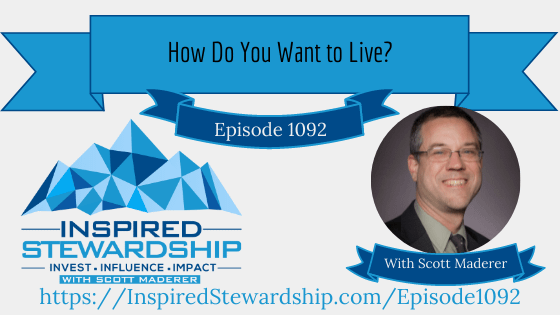 [00:00:00] Scott Maderer: Thanks for joining me on episode 1092 of the inspired stewardship podcast.

[00:00:05] Annie Purdue Olsen: I'm Annie Perdue Olsen from leading better together. I encourage you to find the courage to lead in ministry. And one way to be inspired to do that is by listening to this, the inspired stewardship podcast with my friend, Scott Maderer.

[00:00:22] Scott Maderer: Salvation is not about dying. It's about living. And he tells us this parable to tell us are you a waste of dirt? Are you simply taking up space in oil and providing no fruit? No benefit, no good for the world. Or are you doing something welcome? And thank you for joining us on the inspired stewardship podcast.

[00:00:50] If you truly desire to become the person who God wants you to be. Then you must learn to use your time, your talent and your treasures for your true calling [00:01:00] in the inspired stewardship podcast, you will learn to invest in yourself, invest in others and develop your influence so that you can impact the world.

[00:01:11] In today's spiritual foundation episode about impacting the world. I talk with you about Luke chapter 13 versus one through nine. I talk about why it's important to think more about how you want to live than how you want to die. I also talk about why this is something you can ask every day. Luke chapter 13 versus one through nine says at that very time, there were some present who told him about the Golans whose blood pilot had mingled with their sacrifices.

[00:01:41] He asked them, do you think that because these goons suffered in this way, they were worse sinner than all other Golans no, I tell you, but as you were a pint, you will all parish as they did. Or those 18 who were killed when the tower of Solom fell on them. Do you think that they [00:02:00] were worse offenders than those others living in Jerusalem?

[00:02:03] No. I tell you, but unless you are a pent, you will all perish just as they did. Then he told this parable, a man had a fig tree planted in his vineyard and he came looking for fruit on it and for down none. So he said to the gardener. See here for three years, I've come looking for fruit on this fig tree and still I find none.

[00:02:24] Cut it down. Why should it be wasting the soil? He replied, sir, let it alone for one more year until I dig around it and put manure on it. If it bears fruit next year. And good. But if not, then you could cut it down. This passage is one of those that has a parable in it that at first glance might be a little hard to understand, or a little hard to interpret because this idea of a fruit tree not pro producing fruit.

[00:02:55] And so someone wants to cut it down. And then if you think about it, the Gardner's reply is [00:03:00] almost like I Haven been actually taking care of it. Now let me take care of it and see what it does. The truth is that when we think about these sorts of things we are supposed to be thinking about how we want to live.

[00:03:15] Life is full of opportunities to pick a fight, to shift blame, to point fingers, to scream at each other. If you think about the pandemic and politics and all of these things that are going on right now, whether it's the war in Ukraine, whether it's any of these other things that are going on. All we seem to do right now is point fingers at each other and cast blame.

[00:03:43] And yell and scream at the top of our lungs towards each other, rather than actually having a conversation. In fact, almost all of the rhetoric seems to be designed to inflame panic, frustration, and fear, and to always talk about what [00:04:00] they are, do, doing that other person, other side, it seems to get worse all the time.

[00:04:08] The idea of making other people look bad as opposed to making your side look good is very subtle, but it's dramatically different in how it plays out. If you think about this passage from Luke at first glance, it's oh look, it's just this obscure agricultural par. But instead, this passage starts with this idea of some present, came to tell Jesus about something that was going on.

[00:04:36] Who were these present folks? Were they just average people that were going about their business and that they wanted to check in and make sure that Jesus knew about the latest and greatest events. Whether there was a group of people they belonged to some other organization, or they belonged to disciples of Jesus or who they were.

[00:04:56] It's not made clear instead [00:05:00] they come up to Jesus and they tell him this story and you have to think to yourself, What was their underlying motivation? They probably weren't just doing it to make sure that Jesus was up to date on the latest news. There's got to be a reason behind it. And the truth is we don't really know what event it was.

[00:05:41] Event that was often some minor area, none of the O other gospels refer to this. So there's all sorts of. Speculation and rumor about what it is that was going on here. Pilot, it is known historically that despite the fact that the gospel sort of make him [00:06:00] out as helpless and wishy-washy, he was actually a pretty dramatic tyrant at this time.

[00:06:07] And he did put down rebellions and take out things on the natives at various times where he executed large numbers of the Jews. He was revoking their status at various times and seizing funds. He was doing a lot of things that did not make him a very popular or what we would've considered as a benevolent ruler.

[00:06:31] At that time, there were rumors of an uprising and it was known that pilot had sent undercover soldiers to the temple. To find the ring leaders and then made sure that they were put to death. And in doing that, he may have executed them right there in the temple. And that spilled human blood, that mingled with the animal sacrifices.

[00:06:51] That's probably that event that they're talking about and that, that would've made the temple unclean. And it seems like [00:07:00] the people that are bringing this event to Jesus are trying to find out what is his side on this political debate? Is he on the side of the zealots the Jewish uprising, or is he on the side of pilot and Rome and Caesar?

[00:07:38] Instead he says, no, I tell you this. He tells them all to repent. He basically says salvation is not about dying. It's about living. And he tells us this parable to tell us are you a waste of dirt? Are you simply taking up space [00:08:00] in the soil and providing no fruit, no benefit, no good for the world, or are you doing something?

[00:08:08] And what's more, he also talks about the fact that you have to be cared for in community and built up to be able to provide that fruit. That's what the gardener is doing. The gardener has to love on the F tree for the fig tree to produce fruit. It's not merely enough to scream at the fig tree at the top of its lungs and say, you're on the other side.

[00:08:31] You don't believe what I believe. Therefore, you are evil and you should die. Instead if it own love and caring and kindness and planted and taken care of by the gardener then. It can have time to sprout up and produce good fruit that we all can see. So when you think about this, when you ask this question, how do you want to live?

[00:09:09] Thanks so much for listening to the inspired stewardship podcast as a subscriber and listener, we challenge you to not just sit back and passively listen, but act on what you've heard and find a way to live your calling. If you enjoyed this episode, do me a favor. Go over to facebook.com/inspired stewardship.

[00:09:42] Scott Maderer: that we can connect with you on Facebook and make sure that we're serving you to the best of our abilities with time and tips there until next time I invest your time. Your talent and your treasures develop your influence [00:10:00] and impact the world.