Join us today for an episode about the reason acts of service come from a heart for Christ... 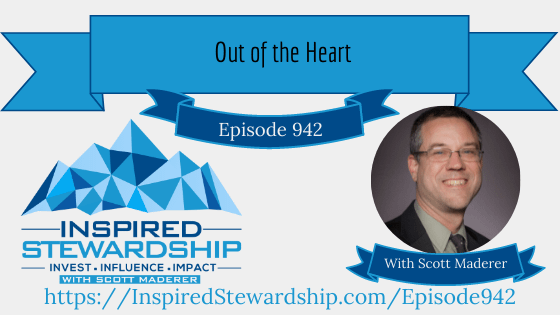 In today’s spiritual foundation episode about investing in others, I talk with you about James 1: 17-27.  I share how this talks about serving others out of a heart for Christ not vice versa.  I also share why this is important to us...

[00:00:00] Scott Maderer: Thanks for joining me on episode 942 of the inspired stewardship podcast.

[00:00:07] Mike Flynn: Hey, this is Mike Flynn, and it's been an honor to be here with you all. I challenge you to invest in yourself, to invest in others, to develop your influence and impact the world using your time, your talent and your treasure to live out your life.

[00:00:24] Having the ability to master the key master who you are created to be is vital. And one major way to be inspired to do that is to listen to this, the inspired stewardship podcast with my friend, Scott.

[00:01:05] Welcome. And thank you for joining us on the inspired stewardship podcast. If you truly desire to become the person who God wants you to be, then you must learn to use your time. Your talent and your treasures for your true calling in the inspired stewardship podcast, we'll learn to invest in yourself, invest in others and develop your influence so that you can impact the world.

[00:01:53] Every generous act of giving with every perfect gift is from above coming down from the father of lights, [00:02:00] with whom there is no variation or shadow due to change and familiar fulfillment of his own purpose. He gave us birth by the word of truth so that we would become a kind of first fruits of his creatures.

[00:02:13] You must understand this by beloved. Let everyone be quick to listen, slow to speak. Slow to anger for your anger does not produce God's righteousness. Therefore rid yourself of all sorted NUS and rank growth of wickedness and welcome with meekness, the implanted word that has the power to save your souls, but be doers of the word and not merely hearers who deceive themselves.

[00:02:59] [00:03:00] If anything, they're religious and do not bridle their tongues, but deceive their hearts, their religion is worth. Religion that is pure and undefiled before God. The father is this to care for orphans and widows in their distress, and to keep oneself unstained by the world. This passage in James is one that it's caused some problems over the years.

[00:03:23] There's a passage or there's a a movement between this belief of works being what saves versus grace being what saves. And this passage actually is one that Luther called out and felt that it emphasized the doing too much. Now don't get wrong. It's not that Luther or others feel that doing these things is wrong.

[00:03:50] It's not that they're bad. In fact, Quite agreed. And if you look at it, the folks are doing these good things. They're taking care of the widow and the orphan they're [00:04:00] serving others. They're doing all of those things instead. It's really about is this idea, is it that the act of doing is what saves us or is there something else?

[00:04:44] James was a Dewar. James was someone who went out and did things, but James looks at what he sees and he doesn't like it. Instead, James steps up and is still a Dewar. He still one of those people that [00:05:00] goes out and does, but now he's a doer because of what he's learned from his brother Christ, because.

[00:05:10] Yeah, that's what took root in him. And that's what he's sharing in this. He's not saying do these things just because you do them. In fact, it's highlighting that the action of these things comes out of an understanding of the word. It comes out of an understanding and a relationship with God that those, these actions result from that they aren't the cause instead they're the results.

[00:06:22] It doesn't matter that the results might be good. What also matters is the heart behind it. And that's why a passage like this is important because it's telling us be slow to anger, but it's not saying, just do that out of the habit instead of saying, do that, because that is what living out a heart of Christ, is it saying don't do good deeds just because you can, don't do good deeds because you think you're going to get something out of it instead.

[00:06:53] Do good deeds because that is what your heart is calling you to do. As a follower [00:07:00] of Christ, it's putting the cause and effect in the right place where God is the cause. And the effect is the change in our heart, in our actions. Now, does that mean to get someone started doing good is always a bad thing.

[00:07:14] And if their intentions are not always positive right off the bat, that we want to just ignore it and not rewarded or not call it out or not say this is a good thing. No, not necessarily doing good, could be good and could be something that we want to call out for sure. But at the same time we want, eventually we want over time.

[00:07:39] We want people to learn that good actions should come. Out of a heart and out of a relationship with Christ. And I believe that's partly what this passage of James is saying, even though it's been called out as a passage that says that you are saved by works, not by grace. At least that's my take on it.[00:08:00]

[00:08:01] thanks so much for listening to the inspired stewardship podcast as a subscriber and listener, we challenge you to not just sit back and passively listen, but act on what you've heard and find a way to live your calling. If you enjoy this episode, do me a favor. Go over to facebook.com/inspire.

[00:08:25] Stewardship and like our Facebook page and market that you'd like to get notifications from us so that we can connect with you on Facebook and make sure that we're serving you to the best of our abilities with time and tips there until next time investor. Your talent and your treasures develop your influence and impact the world. .

But be doers of the word, and not merely hearers who deceive themselves. - James 1: 22