Join us today for Part 3 of the Interview with Dr. Gary Brown from E2 Effective Elders...

This is Part 3 of the interview I had with speaker, pastor, and teacher Dr. Gary Johnson. 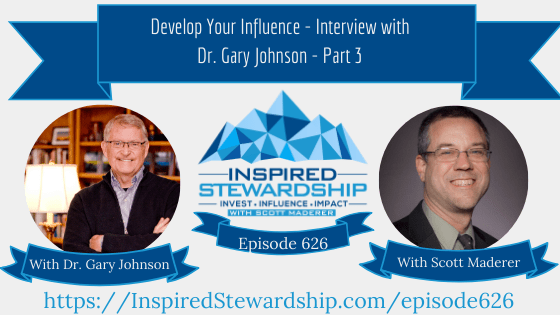 In today’s interview with Dr. Gary Johnson, I ask Gary to share why Christians must recognize their influence.  I also ask him to define leadership and share some of his top leadership resources.

00:00:00 Thanks for joining us on episode 626 of the inspired stewardship podcast. Hey friends, my name is Dr. Gary Johnson and uh, I serve as the executive director of

In today's episode, I ask ​Gary about:

It's being a servant.  It's deliberately thinking less often of ourselves.  - Dr. Gary Johnson

You can connect with Gary using the resources below: