Episode 621: Invest in Others – Interview with Dr. Gary Johnson – Part 2

Join us today for Part 2 of the Interview with Dr. Gary Brown from E2 Effective Elders...

This is Part 2 of the interview I had with speaker, pastor, and teacher Dr. Gary Johnson. 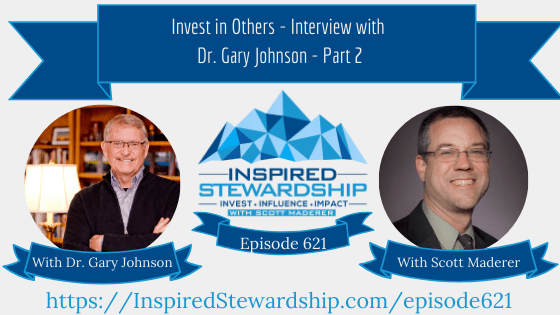 In today’s interview with Dr. Gary Johnson, I ask Gary to talk about leadership as a Christian.  I also ask Gary his view of mentorship and how the life map activity helps us focus on both building ourselves and others.

00:00:00 Thanks for joining us on episode 621 of the inspired stewardship podcast. Hey friends, my name is Dr. Gary Johnson and uh, I serve as the executive director of

In today's episode, I ask Gary about:

We're not pitting one Church against another.  So if you are playing on this team will you allow me to speak into your life? - Dr. Gary Johnson

You can connect with Gary using the resources below: