Join us today for an episode about the story of the wise men... 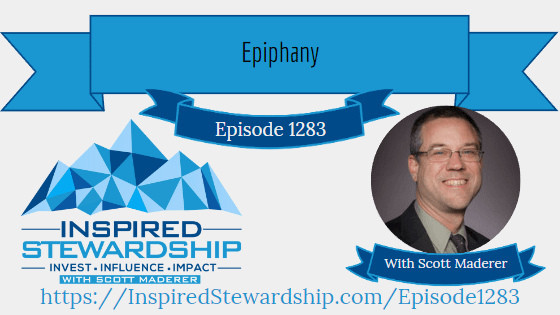 In today’s spiritual foundation episode, I talk with you about Matthew 2: 1-12.  I share how this passage points to both the meanings of epiphany.  I also share how it doesn’t matter if the story is literal or allegorical.

[00:00:09] RJ Jackson: I'm RJ Jackson, the courage giver. I encourage you to have the courage you need to live your calling, and one way to be inspired to do that is to listen to this The Inspired Stewardship Podcast with my friend Scott.

[00:00:32] Scott Maderer: Did they know what was going on? Do we know what is going on? Or is this another moment about faith? A moment of recognizing that we're going to have to live without knowing. We're going to have to take the glimpses that we've been able to receive and allow those. To feed our faith. Welcome and thank you for joining us on the Inspired Stewardship [00:01:00] Podcast.

[00:01:01] If you truly desire to become the person who God wants you to be, then you must learn to use your time, your talent. And your treasures for your True calling. In the Inspired Stewardship Podcast, you'll learn to invest in yourself, invest in others, and develop your influence so that you can impact the world.

[00:01:28] In today's spiritual foundation episode, I talk with you about Matthew Chapter. Versus one through 12. I share how this passage points to both meanings of the word epiphany, and I also share how it doesn't matter if this story is literal or allegorical, it still points to something we need to understand.

[00:01:51] Matthew chapter two verses one through 12 says, in the time of King Herod, after Jesus was born in Bethlehem of Judea, wise men from the [00:02:00] east came to Jerusalem asking Where is the child who has been born King of the Jews, for reser his star at its rising and have come to pay him homage. When King Herd heard this, he was frightened in all of Jerusalem with him and calling together all the chief priests and scribes of the people.

[00:02:19] He inquired of them where the Messiah was to be born. They told him in Bethlehem of Judea, for it has been written by the prophet and you Bethlehem, in the land of Judea are by no means least among the rulers of Judah. For you shall come a ruler who is a shepherd. My people. Then herd secretly called for the wise men and learned from them the exact time when the star had appeared.

[00:02:44] Then he sent them to Bethlehem saying, go and search diligently for the child, and when you have found him, bring me words so that I may also go and pay him homage. When they had heard the king, they set out and they're ahead of them with the star that they had seen at its [00:03:00] rising until it stopped over the place where the child was.

[00:03:03] When they saw that the star had stopped, they were overwhelmed with. On entering the house, they saw the child with Mary, his mother, and they knelt down and paid him homage, then opening their treasure chests. They offered him gifts of gold, frankincense, and myrrh. And having been warned in a dream not to return to herd, they left for their own country by another road.

[00:03:26] This story is one that we've heard in different versions, and I'm gonna talk it through a little. Today, but you have to think to yourself if this story, again, whether it's an allegory, whether it's a literal story it doesn't really matter. Did these characters know? Did they recognize as they reached the end of their journey as they were laying there in looking at this infant in the manger, did they know.

[00:03:58] Did they know as they [00:04:00] opened up and offered their treasures, offered their gifts, did they think back to the journey that they had just been on here? They see the euphoria of seeing this celestial event, seeing this star, maybe a comet, maybe something else. Regardless, this event that points towards something big is coming.

[00:04:24] That was the belief at the time. So they jump on their camels and they begin to go on this long journey that seems to take forever and they end up in Jerusalem. They're not really clear why if the star led them there or if they just said this has to be in Jerusalem, that this event is taking place, that is the center of the world, that is the place where all things like this should happen.

[00:04:53] So they seem to have gone on this trip following a star with great accuracy, and yet for some [00:05:00] reason they detour to Jerusalem and they stop there to ask directions. For all things. Maybe their assumptions had kicked in and they just couldn't imagine that the people at Jerusalem, either it wouldn't be there or they wouldn't know what was going on, and maybe they even had a lack of political understanding and believed that the current king would welcome the birth of this new key new child with just as much enthusiasm as them.

[00:05:30] Maybe they even thought it was his. Maybe they were riding through the streets of Jerusalem and were startled to find that there was no party, there was no celebration, there wasn't a royal baby there, and they immediately are probably identified as outsiders by their accents, by their clothing, by other things.

[00:05:53] And so for some reason, they. Called out by herd, who calls [00:06:00] them into his receiving room and says, what's going on? What are you doing? And maybe they gave him answers out of innocence. Maybe they caught that he was afraid. Maybe they thought he was trying to manipulate them. It, the details aren't there in the story, but for some reason he sends them off to Bethlehem and they go out to find the child.

[00:06:24] Maybe they had some doubts about herd and about the wisdom of involving the powers that be in this quest. Maybe they lost sight of the star for a period of time and they wandered off course. Maybe they were, had this unsettling encounter with this despot who's trying to hold on to power. But eventually they see the star again, and with rejoicing and relief, they begin to head along the path again.

[00:06:55] Maybe even with a little embarrassment for not believing that it was going [00:07:00] where they needed to go, and they end up in this small town in the middle of nowhere. A little nondescript place, and they end up finding that here. This is where the infant is. And they go in, maybe the family's confused.

[00:07:22] They're confused, and then they ask if they can offer this child the gifts that they have, and then they stagger out into the. And go home a different way, an unfamiliar way. But of course, in some ways, every moment from then would be unfamiliar and new no matter what. Because here, something has changed in the world because this is for them, a moment of truth with a capital T.

[00:08:25] But here in the story of Matthew, if you go back to Matthew, none of that matters because they're not the point of the story. The wise men don't really matter at all, except as a way of announcing and pointing to the birth something that gives them meaning and purpose beyond them. They're simply characters in a story.

[00:08:49] Did they know what was going on? Do we know what is going on? Or is. Another moment about faith, a moment of [00:09:00] recognizing that we're going to have to live without knowing. We're going to have to take the glimpses that we've been able to receive and allow those to feed our faith. If you look up the word epiphany in the dictionary, you find a religious definition about a Christian festival celebrated actually on January.

[00:09:21] Commemorating the manifestation of Christ to the Gentiles and the person of the Magi, and you find a definition about stumbling upon something. A glimpse a revelation, an intuitive perception into the reality or essential meaning of something usually initiated by some simple, commonplace, occurrence or experience.

[00:09:46] Not knowing as much as suddenly grasping or understanding, somehow receiving this truth from outside. That's why [00:10:00] Epiphany has two meanings, and yet it's really one meaning because that's what it means to keep moving forward with faith. Thanks for listening.

[00:10:19] Thanks so much for listening to the Inspired Stewardship Podcast. As a subscriber and listener, we challenge you to not just sit back and passively listen, but act on what you've heard and find a way to live your calling. If you enjoyed this episode, do me a favor. Go over to facebook.com/inspired steward.

[00:10:44] And like our Facebook page and market that you'd like to get notifications from us so that we can connect with you on Facebook and make sure that we're serving you to the best of our abilities with time and [00:11:00] tips there. Until next time, invest your. Your talent and your treasures. Develop your influence and impact the world.

On entering the house, they saw the child with Mary his mother; and they knelt down and paid him homage. Then, opening their treasure chests, they offered him gifts of gold, frankincense, and myrrh. - Matthew 2: 11