Join us today for an episode about the way we often hold belief sacred and won't examine them... 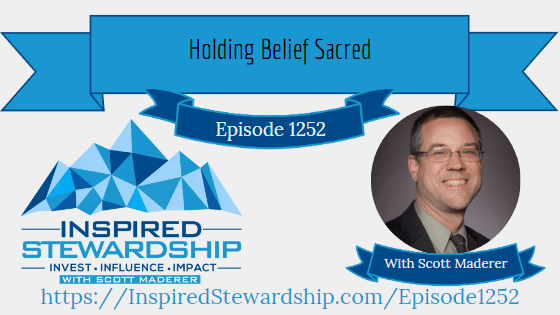 In today’s spiritual foundation episode about impacting the world, I talk with you about Luke 20: 27-38.  I talk about how we often hold our beliefs sacred.  I also talk about why we need to challenge those beliefs.

[00:00:07] Rosser, the author of You, Inc. The step by step guide for finding the business within you. I challenge you to invest in yourself, invest in others, develop your influence and impact the world by using your time, your talent, and your treasures to live out your calling.

[00:00:23] Having the ability to really find your gifts and calling is a key, and one way to be inspired to do that is to listen to this The Inspired Stewardship Podcast by my friend Scott Maderer

[00:00:35] Scott Maderer: Which seems to confront their very belief with their very foundation of their belief. I'm almost certain that they didn't listen to this because people usually do not listen when you can confront their beliefs in this way, but it doesn't make it any less true. I'm sure they had read that verse before.

[00:00:53] I'm sure they had listened to it before, but they. Ever thought of it in this terminology, in this way. [00:01:00] Welcome and thank you for joining us on the Inspired Stewardship Podcast. If you truly desire to become the person who God wants you to be, then you must learn to use your time, your talent, and your treasures for your true calling.

[00:01:15] In the Inspired Stewardship Podcast, you will learn to invest in yourself. Invest in. And develop your influence so that you can impact the world.

[00:01:26] In today's spiritual foundation episode about impacting the world, I talk with you about Luke chapter 20, verses 27 through 28. I talk about how we often hold our beliefs sacred, and I also talk about why we need to examine and challenge those beliefs. Luke chapter 20 versus 27 through 38 says some sades, those who say there is no resurrection.

[00:01:52] Came to him and asked him a question. Teacher Moses wrote for us that if a man's brother dies leaving a wife, but no children, [00:02:00] the man shall marry the widow and raise up children for his brother. Now, there were seven brothers, the first married and died, childless, then the second, and then the third married her, and so on the same way, all seven died, childless.

[00:02:14] Finally, the woman also died in the resurrection. Therefore, whose wife will the woman? For the seven had married her, and Jesus said to them, Those who belong to this age marry and are given in marriage, but those who are considered worthy of a place and that age in the resurrection from the dead, neither marry nor are given in marriage.

[00:02:34] Indeed, they cannot die anymore because they are like angels and are children of God being children of the resurrection. And the fact that the dead are raised. Moses himself showed in the story about the bush where he speaks of the Lord as the God of Abraham, the God of Isaac, and the God of Jacob. Now he is God not of the dead, but of the living for to him, all of them are alive.

[00:02:59] Now, this [00:03:00] is another one of those stories or those parables where, It's clear that there's this almost a setup of often it's the Pharisees, in this case it's the sades who are coming to challenge Jesus. And it's clear that we're supposed to take the other side. But the truth is this isn't really about, Religious superiority or taking sides or belittling someone's viewpoint in this, and in part it's obvious to that because Jesus takes their question seriously even though they probably minute confrontationally we do need a little background here.

[00:03:38] So the sades. And this passage from Luke says, This group, at least of Sades, does not believe in the resurrection. But what isn't said here, but again, if you know how often Luke takes this position of money and richness being a problem, See the sades were relatively well to do [00:04:00] folk in the community.

[00:04:01] They tended to be the, in the power position and. It makes sense if you're in a powerful position and you have all that the world offers to you. . Then why worry about the resurrection? Why worry about what comes after? Obviously, the reason that they have money, the reason that they're in positions of power is because they have favor from God.

[00:04:26] They have blessings on their life. They're there, and the legacy and the eternity that they're after is being able to leave that legacy to the children. Not an uncommon way of thinking even today that somehow wealth equals a sign of God's blessing and leaving your legacy behind is something that's important, and that's even something that in some ways I agree with in some terms, but not all the way either.

[00:04:56] The truth is they aren't really showing up to [00:05:00] ask Jesus about whether or not eternal life, resurrection, all of these things are real, but rather they're trying to set him up, make fun of him, and poke fun at the idea that anyone would believe other than they believe. And here the sades come up and ask this question about one bride and seven brothers.

[00:05:22] And unspoken in the question is, who owns this woman for eternity? Is it the first? Is it the second? Is it third? Is it the fourth is the fifth, sixth, seventh, which is it? And yet, Jesus doesn't make fun of this kind of foolish, hypothetical situation. Instead, he just says, Let me answer your question.

[00:05:45] He basically says in God's kingdom, people aren't property at all. People aren't owned at all. And you may not see it in here about the property thing, but there [00:06:00] is a question behind the question where they're asking. Who has the property, Who has the legacy? Who gets to live on, who has a, the name and the rights in this imaginary heaven that they're setting up?

[00:06:34] It's no longer about who married, who, when for what it, It's a different message altogether. It's a different place. It's not about the stuff that you're concerned about. You will be transformed in a different way. And remember, we're not necessarily talking about quote the afterlife even. We're talking about living in the kingdom, which you can start doing before you've [00:07:00] died.

[00:07:00] It has nothing to do with death here either. He's saying you could right now begin to change your view of the situation. If you'll just listen. If you'll just listen, you can hear a different message. You can hear a different way. You can stop looking at money as your important thing, the thing that gives you meaning and see it for what it is simply a tool.

[00:07:26] And then he turns it on them and uses their own words against them. See the sad. Believe that the MO books of Moses or the Torah, these are scripture and nothing else. And so Jesus actually kind quotes the very man that they honor and look at for authority, Moses and said, Moses actually said there is a resurrection and here's where he did it and how he did.

[00:07:51] Which seems to confront their very belief with their very foundation of their belief. I'm almost certain that they didn't listen to this because people usually do not listen [00:08:00] when you can confront their beliefs in this way, but it doesn't make it any less true. I'm sure they had read that verse before.

[00:08:08] I'm sure they had listened to it before, but they hadn't ever thought of it in this terminology in this. In fact, if you go on one more verse, you can decide to see the scribes that are watching what's going on almost be like, Ooh, score one for Jesus. And yet Jesus isn't really worried about winning the argument.

[00:08:28] He's worried about planting seeds in the hearts and the mines not just of the sad, but all those who are listening to him at all times so that we can figure out what really is the. That we should be called to do this. How should we actually challenge those beliefs that we maybe find sacred?

[00:08:54] How should we look at them with a different set of eyes and recognize? Maybe the [00:09:00] challenge is to recognize that we can live differently starting now. Thanks for listening.

[00:09:07] Thanks so much for listening to the Inspired Stewardship Podcast. As a subscriber and listener, we challenge you to not just sit back and passively listen, but act on what you've heard and find a way to live your calling. If you enjoyed this episode, do me a favor. Go over to facebook.com/inspired. And like our Facebook page and market that you'd like to get notifications from us so that we can connect with you on Facebook and make sure that we're serving you to the best of our abilities with time and tips there.