Join us today for an episode about the story of Zacchaeus... 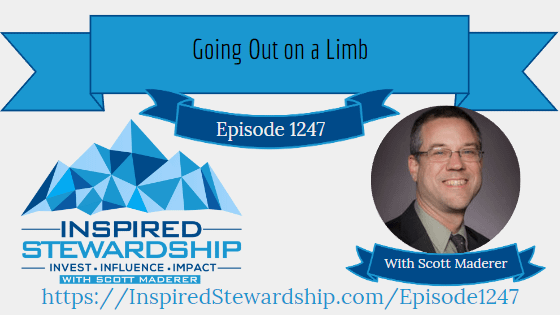 In today’s spiritual foundation episode about developing your influence, I talk with you about Luke 19:1-10.  I talk about how there is a transformation when you go out on a limb. I also share how this allows us to find ourselves in the story.

[00:00:06] Nick Pavlidis: Hey, I'm Nick Pavlis from The Confessions of a Terrible Husband podcast. I challenge you to not be a terrible husband or wife or friend like me by being intentional about stewarding your relationships. One way to be inspired to be a better husband is to listen to this The Inspired Stewardship Podcast with my friend Scott Maderer.

[00:00:31] Scott Maderer: Zacchaeus comes down from the tree and changed his life, or at least it appears so. But what's interesting is the translation that we have in English that says, I will give back and I will pay. At least in the original, the interpretation is that it might have actually said, I give and I pay back it.

[00:01:09] Invest in others and develop your influence so that you can impact the world.

[00:01:16] In today's spiritual foundation episode about developing your influence, I talk with you about Luke Chapter 19 versus one through 10. I talk about how there is a transformation. For you when you go out on a limb, and I also share how this allows us to find ourself in this story. Luke chapter 19 verses one through 10 says he entered Jericho and was passing through it.

[00:01:41] A man was there named Zaas. He was a chief tax collector and was rich. He was trying to see who Jesus was, but on account of the crowd, he could not because he was short in. So he ran ahead and climbed a sycamore tree to see him because he was going to pass that [00:02:00] way. When Jesus came to the place, he looked up and said to him, Zeus, hurry and come down for I must stay at your house today.

[00:02:09] So he hurried down and was happy to welcome him all. Who saw it, began to grumble and said He is gone to be the guest of one who is a. Zaia stood there and said to the Lord, Look, half of my possessions, Lord, I will give to the poor and if I have defrauded any one of anything, I will pay it back four times as much.

[00:02:28] Then Jesus said to him today, Salvation has come to this house because he too is a son of Abraham for the son of man came to seek out to save the lost. This is one of those stories that you've probably heard before. There's even the song that you probably saying if you were ever in Sunday school or children's camp or any of those sorts of things that you know about this it's a song, a story, and a song that kind [00:03:00] of tells this story in a way of this commentary of what's going on about.

[00:03:10] A we little man climbed up in a sycamore tree. You come down. Of course, I've never figured out why we yell that part. If you actually look at the passage and Luke, it doesn't seem like Jesus is shouting at him, but it is this enthusiasm of this moment that is being called out here for ZA Ks in this moment.

[00:03:33] The point is that there's. Moment when Jesus comes to town and there's this experience that's going on again at a number of different levels. This is part of Luke, and if you read the Gospel of Luke, you discover that there's a certain attitude that comes through about people with means people with resources about the [00:04:00] rich people.

[00:04:01] It appears that Luke had a problem with Rich. Or at least he thought that maybe Jesus had a problem with rich people. It can come across that way. If you read the story of the gospel of Luke, the rich seemed to come out badly on the short end of the stick. And so Luke begins here in chapter 19 with, there was a man named Zaas and he was a chief tax collector and was rich.

[00:04:30] At this point, not only is he a chief tax collector and that's bad enough, but it's not the guy sitting there just collecting your sales tax or your business tax or whatever. This is the guy who shows up at the door with muscle with Roman soldiers backing him up and takes everything you've got left.

[00:04:50] He shows. And he recruits others and now they're all hated. He's probably even a head tax collector or a regional [00:05:00] director of tax collectors, or at least there's some evidence for that. But Luke, then tax on even worse, he's rich probably by taking advantage from of people in this position as a tax collector.

[00:05:14] So you know that this story is not gonna end well. A KS is not gonna. Out on a good note here that's what seems to happen all the time in Luke when we talk about rich people, except here, when Jesus comes to town, Zayas says, I need to see him, but he doesn't summon Jesus to come to him.

[00:05:37] Instead, he runs out and climbs a tree, a picture. The mayor of your. Running to see someone and climbing a tree, picture a famous politician or a famous celebrity doing this. Somebody who's a man of [00:06:00] status and standing, and yet he's acting like a kid. So excited to see Jesus in this moment, and Jesus just kinda rolls with it.

[00:06:10] He seems to accept it. He says, I'm going to your house. He invites himself over to see the. At his house, who would climb a tree just to see him. And it's not made clear in this passage why Jesus says, I must stay at your house today. Must stay. But we don't know why. Zeus was attracted to Jesus. And we don't know why.

[00:06:35] Jesus said, I've gotta stay there. But whatever it is, whatever this moment was it a change of heart? Was it worry about competition? Was it hope? Was it fear? We don't know, and apparently, at least in this version of the story told by Luke, it doesn't matter, the transformation, the change in behavior, this thing at the end about giving away [00:07:00] half of what he owns and paying back four times the amount.

[00:07:03] Notice, by the way, that Zaki doesn't actually say I have defrauded people. He just says, If I have, then let me do. All happens after Jesus says, I'm coming to see you, I'm coming to your house. Zacchaeus comes down from the tree and changed his life. Or at least it appears so. But what's interesting is the translation that we have in English that says, I will give back and I will pay back.

[00:07:30] At least in the original, the interpretation is that it might have actually said, I give and I pay back it. It's. I'm already doing this. Maybe he actually is not a dishonest tax collector. Maybe he's already been doing that. He's already generous. But by that interpretation, Jesus is going to dine with him and he's already a good guy.

[00:07:54] But then look at the reaction of the crowd. The crowd doesn't think this is a good guy. The crowd, in [00:08:00] fact, begins to grumble and gripe whenever Jesus says, I'm going over there. They have that moment of, Why are you going to his house? Don't you know he's a sinner? Don't you know he's not worth it?

[00:08:11] Don't you know he's not worth your time, don't you? That he's not worth being someone to waste your energy on. He's a sinner he isn't even worth bothering with. Stay and stick with the believers, your own kind. And Jesus's answer is he is. His kind is just like your kind. He's one of you. He's a son of Abraham, just like you.

[00:08:40] He's a child of God just like you. If I ignore him, I ignore you, but I didn't come out here to ignore the ones who will go out on a limb, literally in this case, just to see me. I'm not ignoring someone who risks their reputation even. As it might [00:09:00] have been. I'm not going to ignore someone who is putting aside proper behavior and acts like a child just to see me.

[00:09:09] We don't know what was in Zaki mind when he ran and climbed the tree, and that's probably a good thing because I think most of us have that same sort of possible mix of motives going on in our own heart, in our own. Yet, Jesus could show up and invite himself into our house at any moment. And no matter what anyone else thinks or says, we are worth it as well, we're worth the inconvenience.

[00:09:41] See, you can show up in this story as a member of the crowd shaking your head and looking at those people who just aren't worth it. You could be one of the disciples standing next to Jesus, inviting yourself into the homes of those who think they are sinners. You could be out on the limb hoping for a glimpse of [00:10:00] Jesus and a transformation and a whole new way of living.

[00:10:13] Thanks so much for listening to the Inspired Stewardship Podcast. As a subscriber and listener, we challenge you to not just sit back and passively listen, but act on what you've heard and find a way to live your calling. If you enjoyed this episode, do me a favor. Go over to facebook.com/inspired stewardship and like our Facebook page and market that you'd like to get notifications from us so that we can connect with you on Facebook and make sure that we're serving you to the best of our abilities with time and tips there.

When Jesus came to the place, he looked up and said to him, "Zacchaeus, hurry and come down; for I must stay at your house today." - Luke 19: 5