Join us today for an episode about the impact of making our own choices... 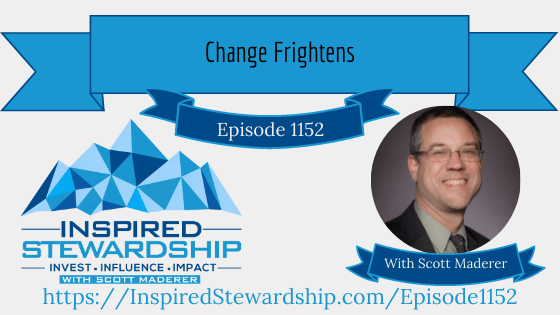 [00:00:07] Marcus Hall: hall, author of spiritual wealth, a 40 day journey to developing a stewardship mindset. I challenge you to invest in yourself and invest in others. Develop your influence and impact the world by using your time, your talent and your treasures to live out your calling, having the ability to steward your resources.

[00:00:26] And one way to be inspired to do that is to listen to this, the inspired stewardship podcast with my friend, Scott

[00:00:33] the disciple. Mine is other focus, other centered, outward focused before being self-focused. And to get there, we have to learn to quiet our mind. We have to learn to set ourselves aside and listen in that silence for the still quiet voice of God. Welcome and thank you for joining us on the inspired stewardship podcast.[00:01:00]

[00:01:00] If you truly desire to become the person who God wants you to be, then you must learn to use your time, your talent and your treasures for your true calling and the inspired stewardship podcast. You will learn to invest in yourself, invest in others and develop your influence so that you can. The word

[00:01:21] and today's spiritual foundation episode about impacting the world. I talked with you about Luke chapter eight, verses 26 through 39. I talk with you about how we often try to own our own work instead of trusting in God. And I also talk about how we find that word in the quiet, not in the noise. Luke chapter eight, verses 26 through 39 says then they arrived in the country of the Garris scenes, which is opposite Galilee.

[00:02:10] For Jesus had commanded the unclean spirit to come out of the man. For many times it had seized him. He was kept under guard and bound with chains and shackles, but he would break the bonds and be driven by the demons, into the wilds. Jesus then asked him, what is your name? He said, Legion for many demons had entered him.

[00:02:31] They begged him not to order them to go back into the. Now they're on the hillside and large herd of swine was feeding and the demons begged Jesus to let them enter these. So he gave them permission. Then the demons came out of the man and entered the swine and the herd rushed down the steep bank into the lake and was drowned.

[00:02:49] When the swine herd saw what had happened, they ran off and told in the city and in the county, then people came out to see what had happened. And when they came to Jesus, they found the [00:03:00] man from whom the demons had gone sitting at the feet of. Clothed and in his right mind. And they were afraid, those who had seen it told how the one who had been possessed by demons had been healed.

[00:03:11] Then all the people of the surrounding country of the Garrison asked Jesus to leave them for, they were seized with great fear. So he got in a boat and returned the man from whom the demons had gone begged that he might be with him, but Jesus sent him away saying returned to your home and declare how much God has done for.

[00:03:30] So he went away proclaiming throughout the city. How much Jesus had done for him. Sometimes Jesus asks some pretty obvious questions, like asking a blind man, what do you want me to do for you? And sometimes he just does things. He just asks. What have you to do with me? Jesus is the question that is asked apparently after Jesus had already started to work, the [00:04:00] demons seem to have recognized Jesus and know what he could do.

[00:04:04] In fact, it's clear from this passage that Jesus had already spoken to them and told them to come out, but it seems like they basically played dumb and said, what have you had to do with us? Or are you talking about. And they recognize Jesus, but they really didn't want to bay him and they seem to want to negotiate.

[00:04:23] You really don't want me to go. You don't want to drive me out. This is where I live. This guy likes me. We get along well. He's naked and living in a cemetery, but it's a life maybe in a way, this made sense with what was going on that this idea. This representation of living with broking, newness, living with hatred, living in fear made sense, but this representation doesn't actually make any sense to Jesus.

[00:04:56] This idea that we might live with brokenness live with hatred [00:05:00] live in fear. Doesn't make sense. And Jesus seems to be getting rid of the problem. And then. This dialogue starts, the negotiations start. And now the conversation actually starts because Jesus knew what the man needed. He knows what we need and can act, but is willing for us to have self-determination for us to make our own choices.

[00:05:32] Even if some times those choices make things worse. Jesus was apparently going to send the demons out and send them back to where they came from the abyss. But they instead say, let us go into the pigs. This metaphor is a slippery slope. I doesn't really matter whether this is a literal exchange with literal demons or whether this is a metaphorical or symbolic sort [00:06:00] of message.

[00:06:01] Legion asked for a ride in the pigs instead of being sent into the BIS, but then the pigs run into the sea and the demons end up going back to the abyss. Anyway, they wanted to avoid this ending. And yet they got it through their own actions, through their own choices. And Jesus left them because they asked.

[00:06:28] In fact later, the villagers asked Jesus to leave and he leaves he's given the chance to leave. And so he just goes, think about it from our point of view, our own life. A lot of times I think we turned to God, we turned to Jesus and we say, no, thanks. I've got it. I can handle this. I can take care of this on my own.

[00:06:51] I'll ride my own pigs wherever they may take. It may be out of fear that we choose to [00:07:00] send Jesus away. It may be out of hatred. It may be out of confusion, but this crazy man, when the villagers come, they find him at Jesus, his feet clothed and in his right mind. And they find that frightening it's a change and change is unsettling.

[00:07:21] Even change in this case from crazy to say, Because the patterns disrupted, they, they knew how to deal with the guy when he was the crazy guy living out in the graveyard. But now he's clothed in his right mind and they don't know how to deal with that. They grown used to him being out on the edge of town, yelling and screaming and foaming at the mouth, so to speak.

[00:07:47] Maybe he was even a threat that they use to keep the children in line behavior you'll end up like him, or we'll give you to him or he might get you. Maybe he was a boogeyman figure. [00:08:00] He was really not though. He was a person just like you and me, but he was also the enemy in a way, just like we are in a way as well.

[00:08:15] So seeing him now saying scared them and they asked Jesus to leave. We often I think are faced with change in our life and we find and ask that same question. What do you have to do with me? Jesus. What changes are you bringing on my life? What growth are you asking me to make? What effort are you asking me to make or to require or to choose?

[00:09:19] He didn't stay with Jesus, at least not physically in the way he probably imagined when he asked instead, Jesus says, know your way of staying with me is to go back to your home and tell others about me. He chose to be rescued from a life of despair and become an live and a life of hope and joy. And because of that joy, he shares the love of Jesus with all he encountered.

[00:09:47] He faced his madness, but now he finds a place of stillness and commitment. He was now in his right mind clothed and in his right [00:10:00] mind, Luke says, and that right mind was focused on Christ. Let the same mind be in you. That was in Christ. Jesus. It says in Philippians two, if this right mind. Is one of longing and serving and hoping and following it's a mind of discipleship.

[00:10:23] It's a mind of quietness and sanity because even though the world at times is mad and is turning inward and saying worship this instead of God, the disciple mind is other focused, other centered, outward focused. Before being self-focused and to get there, we have to learn to quiet our mind. We have to learn to set ourselves aside and listen in that silence for the still quiet voice of [00:11:00] God, because the truth is God's voice doesn't come in the earthquake or the fire or the shaking of the wind.

[00:11:09] Any of those things. Instead, it comes in the still small voice. It comes in serenity it's comes as the echo of a presence. It comes as that sound that you hear when you don't even know that you hear a sound, it's not really a to-do list item. It's a to be. And that silence is where we discover that the change that God is calling for us to do is our choice.

[00:11:50] Thanks so much for listening to the inspired stewardship podcast as a subscriber and listener, we challenge you to not just sit back and [00:12:00] passively listen, but act on what you've heard and find a way to live your calling. If you enjoy this episode, do me a favor. Go over to facebook.com/inspire.

[00:12:14] Stewardship and like our Facebook page and market that you'd like to get notifications from us so that we can connect with you on Facebook and make sure that we're serving you to the best of our abilities with time and tips there until next time, invest your time. Your talent and your treasures develop your influence and impact the world. .

Then all the people of the surrounding country of the Gerasenes asked Jesus to leave them; for they were seized with great fear. So he got into the boat and returned. - Luke 8: 37