Join us today for an episode about the calling we all have... 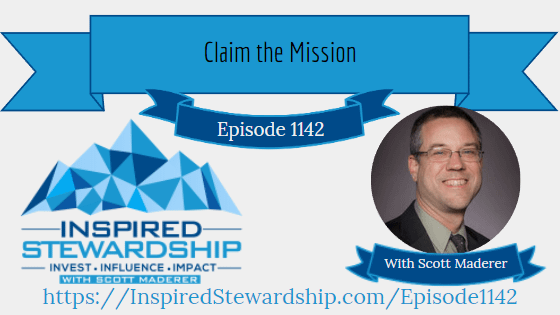 In today’s spiritual foundation episode about investing in others, I talk with you about Acts 16: 16-34.  I share why we all have a mission or calling we have to claim.  I also share why claiming that mission is difficult and causes us to change.

[00:00:07] Bas Lebesque: I'm Bas Lebesque and I challenge you to invest in yourself, invest in others, develop your influence and impact the world by using your time, your talent and your treasures to live out your calling, having the ability to overcome your limiting beliefs is key.

[00:00:26] And one way to inspire to do that is to listen to this, the inspired or chip podcast with Scott Maderer.

[00:00:35] Scott Maderer: And we have difficulty recognizing the things that we're called to do and embracing our mission of life and embracing what it is we're supposed to be doing. And yet, What ends up happening is we try to do it. If you think about it in a way Paul's reaction to this young girl, who's going out in front [00:01:00] of them and declaring the word welcome.

[00:01:03] And thank you for joining us on the inspired stewardship podcasts. If you truly desire to become the person who God wants you to be, then you must learn to use your time. Your talent and your treasures for your true calling in the inspired stewardship podcast, we'll learn to invest in yourself, invest in others and develop your influence so that you can impact the world.

[00:01:29] And today's spiritual foundation episode about investing in others. I talk with you about acts chapter 16, verses 16 through 30. I share why we all have a mission or calling, we have to claim. And I also share why claiming that mission is difficult and causes us to change act 16, 16 through 34 says this one day is we were going to the place of prayer.

[00:01:54] We met a slave girl who had a spirit of divination and brought her owners a great [00:02:00] deal of money by fortunate. While she followed Paul and us, she would cry out. These men are slaves of the most high God who proclaim to you a way of salvation. She kept doing this for many days, but Paul very much annoyed turned and said to the spirit, I order you in the name of Jesus Christ to come out of her.

[00:02:20] And it came out of her that very. But when our owners saw that their hope of making money was gone, they seized Paul and Silas and dragged them into the marketplace before the authorities, when they had brought them before the magistrates, they said, these men are disturbing our city and they are Jews and are advocating customs that are not law for us as Romans to adopt or observe the crowd joined in attacking them.

[00:02:44] And the magistrates had them stripped of their clothing and ordered them to be beaten with rods. After they had given them a severe flogging, they threw them into prison in order the jailer to keep them securely following these instructions. He put them in the innermost cell and [00:03:00] fastened their feet in the stocks about midnight.

[00:03:02] Paul and Silas were praying and singing hymns to God and the prisoners were listening to them. Suddenly there was an earthquake so violent that the foundations of the prison were shaken and immediately all the doors were opened and everyone's chains were unfastened. When the jailer woke up and saw the prison doors wide open, he drew his sword and was about to kill himself since he supposed that the prisoners had escaped.

[00:03:25] But Paul shouted in a loud voice do not harm yourself for, we are all here. The jailer called for lights and rushing in. He fell down trembling before Paul and Silas ninny brought them outside and said, SIRS, what must I do to be safe? And they answered believe on the Lord, Jesus, and you will be saved you and your household.

[00:03:46] They spoke the word of the Lord to him and to all who were in his house at the same hour of the night, he took them and washed their wounds. Then he and his entire family were baptized without delay. He brought them up into the house and set food before [00:04:00] them. And he has an entire household rejoiced that he had become a believer in God.

[00:04:50] And I feel like it's a complete waste of time, but at the same time, I believe this idea of identifying and [00:05:00] claiming our mission is so important, especially to people of faith, this idea of going out and doing what we're called to do Jesus gave the commandment of go into the world, go out and make disciples go.

[00:05:47] And I would argue that most of those missions, I think most people of faith, regardless of whether they're Christian or not would agree with in principle, the idea. Of going out and making [00:06:00] sure that people hear the word of God. And here in acts, this is takes up after the passage that if you were listening last week, we talked about there's still, the disciples are still in Macedonia and they're traveling around.

[00:06:17] And this girl is following after him tugging at them and tagging along kind of irritating. Proclaiming the good news about them. They're getting free advertising, so to speak, but at the same time it says, Paul gets annoyed by this. I'm not sure why. I'm not sure what it was about it.

[00:06:42] I don't know if she was bringing maybe negative attention to them. I don't know if Paul had another reason, but finally he turns and he heals her of this ability. To divine. And of course, what happened is the owners of this slave [00:07:00] girl got mad because they were using her as a way of making money. And then Paul and Silas and the others were arrested and thrown into a jail.

[00:07:13] They're there singing. And there's an earthquake that releases them, sets them free. And yet no one seizes the moment and runs for freedom. There. They're all there. They're just waiting for what's going next. And then the jailer courses called recognizes that they may have escaped and goes to commit suicide.

[00:07:35] And Paul says, wait a minute. Don't bother we're all here. And what happens what's unsettling is because of that, because of this. The man was then raised and converted to believe. This whole entire event is weird. It's unsettling. It's extraordinary in many ways, but what's [00:08:00] really weird. Is it just the earthquake?

[00:08:01] Isn't just the chains falling away. It's not those sorts of events. It's the fact that then when they had an opportunity to run free, they didn't, they don't behave in a way that the jailer expected. Change is hard and we have difficulty recognizing the things that we're called to do and embracing our mission of life and embracing what it is we're supposed to be doing.

[00:08:31] And yet what ends up happening? Is we try to do it. If you think about it in a way Paul's reaction to this young girl, who's going out in front of them and declaring the word, isn't really a good Christian Christ's like reaction. The result was positive, but the action wasn't necessarily perfect.

[00:08:59] It wasn't [00:09:00] necessarily. We would hold up as a Christian action. It says Paul was annoyed. And so the truth is we often have difficulty living into our calling. We often have difficulty acting out our mission, doing those things that we know we're called to do. And recognizing that and understanding that everyone who has gone before us and everyone who will come after us also has challenges in those areas is important, but it doesn't give you an excuse to stop trying.

[00:09:38] It doesn't mean that you don't continue to try to live out your calling. It simply means that you recognize that you're on a journey towards recognizing and living your call. It's never the destination. Thanks for listening.

[00:09:56] Thanks so much for listening to the inspired stewardship [00:10:00] podcast. As a subscriber and listener, we challenge you to not just sit back and passively listen, but act on what you've heard and find a way to live your. If you enjoy this episode, do me a favor, go over to facebook.com/inspired stewardship and like our Facebook page and market that you'd like to get notifications from us so that we can connect with you on Facebook and make sure that we're serving you to the best of our abilities with time and tips there until next time investor.

[00:10:42] Your talent and your treasures develop your influence and impact the world.

She kept doing this for many days. But Paul, very much annoyed, turned and said to the spirit, "I order you in the name of Jesus Christ to come out of her." And it came out that very hour. - Acts 16: 18