Episode 1137: Vision and Our Response

Join us today for an episode about the response to vision... 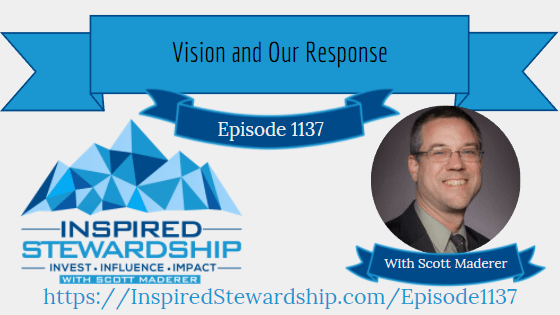 In today’s spiritual foundation episode about investing in yourself, I talk with you about Acts 16: 9-15.  I share how vision and our response to them is so important.  I also talk about why Acts is all about vision.

Episode 1137: Vision and Our Response

[00:00:07] Julio Muhorro: I'm Julio Muhorro, and I challenge you to invest in yourself, invest in others, develop your influence and impact the road by using your time, your talent and your treasures to live out your colleagues. Having the ability to develop yourself is key.

[00:00:58] Welcome. And [00:01:00] thank you for joining us on the inspired stewardship. If you truly desire to become the person who God wants you to be, then you must learn to use your time, your talent and your treasures for your true calling in the inspired stewardship podcast. We'll learn to invest in yourself, invest in others and develop your influence so that you can impact the world.

[00:01:25] And today's spiritual foundation episode about investing in yourself. I talk with you about acts chapter 16, verses nine through 15. I share our vision and our response to them is so important. And I also talk about why acts is all about vision acts. Chapter 16 says during the night, Paul had a vision.

[00:01:48] There stood a man of Macedonia pleading with him and say, Come over to Macedonia and help us, but he had seen the vision. We immediately tried to cross over into Macedonia being convinced that [00:02:00] God had called us to proclaim the good news to them. We set sail from truss and took a straight course to San Mateo race and the following day to Neapolis.

[00:02:10] And from there to fill a pie, which is a leading city of the district of Macedonia and a Roman colony, where you remained in the city for someday. On the Sabbath day, we went outside the gate by the river where we suppose there was a place of prayer. And we sat down and spoke to the women who had gathered there.

[00:02:28] A certain woman named Lydia, a worshiper of God, was listening to us. She was from the city of bacteria and a dealer in purple cloth. The Lord opened her heart to listen, eagerly to what was said by. When she and her household were baptized, she urged us saying, if you have judged me to be faithful to the Lord, come and stay at my home.

[00:02:50] And she prevailed upon us because the truth is vision is one of those things that we talk a lot about. And it shows up in the [00:03:00] Bible over 80 times, many of those readings appear in writings that are apocryphal. But others appear throughout it. Now there's other uses of the word, vision about the vision that people have, but the book of acts, believe it or not uses that word.

[00:03:23] 11 separate times. The most of all of the books. This idea of vision is something that occurs throughout the chapters of acts. Previous to this passage, there's a passage about the vision of the unclean food that allows the Gentiles to come in and there's other visions throughout at. And there's this concept and content that shows up over and over again, visions that come from God and that directly impact the [00:04:00] direction that the church of that time is going in.

[00:04:05] This idea that the church at this time was very close to the idea of dreams and visions as a way of communicating with God. And we don't tend to view that today that way, because we have a more scientific view and that's a good thing in many ways, but it's also a loss at times. I think sometimes it's helpful to recognize that, to open yourself, to hearing the voice of God is about.

[00:04:37] Sometimes listening to the dreams and the visions that are being put into your heart and into your mind, not just listening to that feeling in your gut though, that can be part of it too, but also dealing with what's going on in our hearts and our minds, what we would call having a vision of what we're supposed to [00:05:00] do and where we're supposed to go.

[00:05:02] The truth is without having a vision, it's almost impossible to create anything. Everything in the world started as an idea. It started as a vision. It started as a picture in someone's mind, and then it became reality. We create things out of vision, out of dreams, out of thought, there's this whole idea in here?

[00:05:28] This Paul's vision coming to him. And then immediately it says they tried to cross over. There's not a debate. There's not a deliberation it, or at least it's not hin this passage. Instead they went, they immediately go, this is the idea of them going together. Acts was written by Luke and Luke is along for the ride here.

[00:05:55] He's part of that journey. He's part of catching the [00:06:00] vision from Paul and going along for the ride. And then when they get there, what's amazing is what happened is someone listens. Okay. Maybe that's not all that amazing people listen all of the time, but at this point, someone listens and this woman named Lydia comes over and says, Come to my house, but think about it.

[00:06:25] They named her, they say this woman named Lydia and women are often not named in the Bible. And yet women show up over and over again in important places in the Bible. And this is one of those Lydia and bites everyone in. And she directs that everyone in her household should be baptized that. She's having influence and direction.

[00:06:53] She's acting in a way that brings the whole household into the [00:07:00] family of God. And it all began. With a vision with a dream, with a proclamation, a feeling in Paul's heart that was given to him by God. I think God is always reaching out to us with visions, but the problem is we're not always open to listening to that vision.

[00:07:22] That's the key. It's not just the vision. That's. It's our response to that vision. What do we do whenever we have that feeling? Do we chalk it up for last night's pizza? Do we say that's all well and good, but I really don't want to do that. I'll just not listen to this one.

[00:08:29] Thanks so much for listening to the inspired stewardship podcast. As a subscriber and listener, we challenge you to not just sit back and passively listen, but act on what you've heard and find a way to live your. If you enjoyed this episode, do me a favor, go over to facebook.com/inspired stewardship and like our Facebook page and market that you'd like [00:09:00] to get notifications from us so that we can connect with you on Facebook and make sure that we're serving you to the best of our abilities with time and tips there until next time investor.

[00:09:15] Your talent and your treasures develop your influence and impact the world.

On the sabbath day we went outside the gate by the river, where we supposed there was a place of prayer; and we sat down and spoke to the women who had gathered there. Acts 16:13