Episode 1127: Hearing the Voice of God

Join us today for an episode about the reason that we need to listen for the voice of God in our lives... 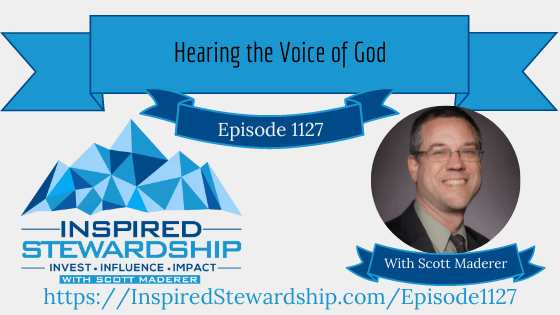 In today’s spiritual foundation episode about developing your influence, I talk with you about Acts 9:1-20.  I share how this story illustrates how God can call us to change direction in our lives.  I also talk about why hearing the voice of God isn’t always literal...

Episode 1127: Hearing the Voice of God

[00:00:08] Ernest Prabhakar: Hi everyone. This is Ernest Prabhakar this is your chance to invest in yourself. Invest in others, develop your influence and impact the world, but using your time, talent and treasures to live out your calling. This is a great chance to find the opportunity to become the Christian.

[00:00:25] You always want it to be, and to be inspired, to be the best version of yourself. Listen to the inspired stewardship podcast with my friend,

[00:00:59] [00:01:00] Welcome and thank you for joining us on the inspired stewardship podcasts. If you truly desire to become the person who God wants you to be, then you must learn to use your time, your talent and your treasures for your true calling in the inspired stewardship podcast. We'll learn to invest in yourself, invest in others and develop your influence so that.

[00:01:50] Meanwhile, Saul, still breathing, threats and murder against the disciples of the Lord, went to the high priest and asked him for letters to the synagogues at Damascus, [00:02:00] so that if he found any who belonged to the way men or women, he may bring them bound to Jerusalem. Now, as you, as he was going along and approaching Damascus, suddenly a light from heaven flashed around him, he fell to the ground and heard a voice saying to him, Saul, why do you persecute me?

[00:02:19] And he asked, who are you? Lord? And the reply came, I am Jesus, whom you are persecuting, but get up and enter the city. And you will be told what you are to do. The men who were traveling with him stood speechless because they heard the voice, but saw no one saw I've got up from the ground. And though his eyes were open, he could see nothing.

[00:02:40] So they led him by the hand and brought him into the mouth. For three days, he was without sight and neither ate or drank. Now, there was a disciple in Damascus named . The Lord said to him in a vision NAS and he answered here. I am Lord. The Lord said to him, get up and go to the street called straight [00:03:00] and at the house of Judas, look for a man of Tarsus named Saul.

[00:03:04] At this moment, he is praying and he has seen a vision of a man named NAS, come in and lay his hands on him so that he met. We're gaining. But an S answered Lord, I've heard from many about this man, how much evil he has done to your saints in Jerusalem. And here he has authority from the chief priest to bind all and any who invoke your name.

[00:03:26] But the Lord said to him, go for, he is an instrument whom I have chosen to bring my name before Gentiles and Kings. And before the people of Israel, I myself will show him how much he must suffer for the sake of my. So NIS went and entered the house. He laid his hands on Saul and said, brothers saw the Lord.

[00:03:45] Jesus, who appeared to you on your way here has sent me so that you may regain your sight and be filled with the holy spirit. And immediately something like scales fell from his eyes and his sight was restored. Then he got up and was [00:04:00] baptized. And after taking some food, he regained his strength for several days.

[00:04:04] He was with the disciples in Damascus. And immediately he began to proclaim Jesus in the synagogues saying he is the son of God. Now what's interesting is this passage picks up at the beginning of the journey of Paul. And you may be saying, wait a minute, it doesn't say Paul, anywhere in this is Saul.

[00:04:55] And Saul became Paul because he gave up his former. [00:05:00] The life of persecution and oppression for his new life, walking with Jesus. But the truth is also that Paul and Saul is living in kind of two worlds at once. Where it says Saul. Who's also called Paul. There's an idea here that saw was his name in a Hebrew context.

[00:05:26] And Paul was his name when he was speaking to the Gentiles or to the Romans, but that he was both at the same time. Now, this is still representing in this case, a change our redirection in the church directory of his life from one of persecution to one of shepherding and launching many choices.

[00:05:47] But the truth is that this sort of change is centered on identity, who is Saul in this? And what is it that motivates them or who is Paul? And the said, what is it [00:06:00] that motivates? He's motivated first all by this idea of persecuting the disciples of the Lord. But then he changes later on after a flash of light from heaven and a voice that says just, what are you doing?

[00:06:18] Who are you doing it to? And at that point, Paul slash salsa. Who is this Lord? He recognizes that who's the identity of this voice is important as well. He's basically asking who do you owe allegiance to? And the voice speaks to him and begins to guide him and witness to him that maybe he's got a problem in the direction of his life saw was driven.

[00:06:51] He was sure he knew what was going on. He knew what was right. But in fact, he then [00:07:00] began to witness because sometimes witnessing is not just about speaking, but witnessing is about listening to others stories and listening to the word that's coming from outside. See, this is the truth about how sometimes we can hear a literal voice of God to change direction in our life, but more often than not, I don't think we necessarily hear this booming voice and see this shining light.

[00:08:27] God's voice shows up sometimes in thoughts, in words, in actions, Indeed's in listening to others and in hearing what's spoken and unspoken in those messages. This is why this story, though, it talks about a literal vision in the literal voice. You don't necessarily have to hear that. I talk to people all the time.

[00:08:52] I talked to someone this weekend at a walk to a Mesa event and they were struggling. They said they really felt a direction on their life, but [00:09:00] they had never really heard the call of God. But then when I got to talking to them, there were time after time in their story and in their witness where they were talking about.

[00:09:36] And are you spending time listening? Not just talking. Whenever you're struggling to hear the voice of God in your life. Thanks for listening.

[00:09:48] Thanks so much for listening to the inspired stewardship podcast. As a subscriber and listener, we challenge you to not just sit back and passively listen, but [00:10:00] act on what you've heard and find a way to live your. If you enjoy this episode, do me a favor, go over to facebook.com/inspired stewardship and like our Facebook page and market that you'd like to get notifications from us so that we can connect with you on Facebook and make sure that we're serving you to the best of our abilities with time and tips there until next time investor.

[00:10:35] Your talent and your treasures develop your influence and impact the world.

Saul got up from the ground, and though his eyes were open, he could see nothing; so they led him by the hand and brought him into Damascus. For three days he was without sight, and neither ate nor drank. - Acts 9: 8-9