Join us today for an episode about the Gulf we have to cross... 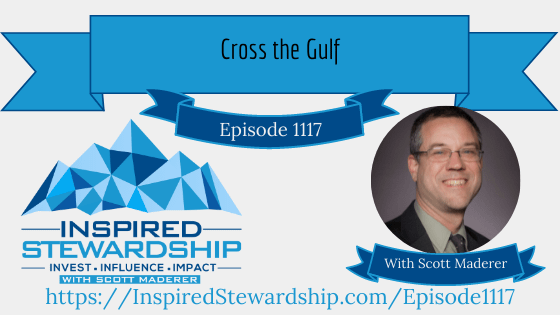 In today’s spiritual foundation episode about investing in yourself, I talk with you about Luke 16: 19-31.  I share why crossing the gulf between people takes action.  I also share why this journey is part of what we are all called to do.

[00:00:07] Kim Avery: I'm Kim Avery author of the prayer powered entrepreneur. And I challenge you to focus on your calling as a Christian entrepreneur. One way to be inspired to do that is to listen to this, the inspired stewardship podcast with my friend Scott Maderer.

[00:00:47] If you truly desire to become the person who God wants you to be, then you must learn to use your time, your talent and your treasures for your true calling in the inspired stewardship podcast. We'll learn [00:01:00] to invest in yourself, invest in others and develop your influence so that. Can impact the work

[00:01:31] There was a rich man who was dressed in purple and fine linen and who feasted sumptuously every day. And that his gate lay a poor man named Lazarus covered with sores, who long to satisfy his hunger with what fell from the rich man's table. Even the dogs would come and lick his sores. The poor man died and was carried away by the angels to be with Abraham.

[00:01:54] The rich man also died and was. And Haiti's where he was being tormented. He looked up [00:02:00] and saw Abraham far away with Lazarus by his side. He called out father, Abraham have mercy on me and send Lazarus to dip the tip of his finger in water and cool. My tongue for, I am an agony in these flames, but Abraham's.

[00:02:16] Child. Remember that during your lifetime, you received your good things and Lazarus, enlight manner, evil things, but now he is comforted here and you are an agony beside all of this, between you and us. A great chasm has been fixed so that those who might want to pass from here to you cannot do and no one can cross from there to us.

[00:02:38] He said, Then father, I beg you to send him to my father's house for, I have five brothers that he may warn them so that they will not also come into this place of torment. And Abraham replied, they have Moses and the prophets, they should listen to them. He said, no father Abraham. But if someone goes to them from the dead, they will [00:03:00] repent.

[00:03:00] He said to him, if they do not listen to Moses and the prophets, neither will they be convinced. Even if someone rises from the. So there's some context for this story. That's actually taken out of this passage, but I think you can get some of the ideas just from reading this, but actually back a couple of verses in verse 16, it says the law and the profits were in effect until John came since then.

[00:03:29] The good news of the kingdom of heaven is proclaimed and everyone tries to enter it by. Of course that doesn't necessarily add much overall context. What does it mean by entering the kingdom by force? Does it mean storming the kingdom like we would with brute strength and weaponry, or is it meaning the people that think they deserve entrance?

[00:03:57] The people that have thought that they've earned their way [00:04:00] into the kingdom of. Through status or through wealth or through power may not actually have that place. And then this parable follows that up. And does it really seem as to be a surprise on the part of the man to find himself in a place of punishment instead of paradise?

[00:04:19] Bold enough to shout across this chasm or this gap and ask for mercy and ask Lazarus to come and help cool his tongue. But he actually doesn't necessarily be saying that out of sort of contrition. In fact, we don't really have a full enough understanding of the tone of this request. He's asking.

[00:04:44] Ma mercy, but he seems to view Lazarus still as a means and not an end. He seems to be asking sin Lazarus to me, to let him serve me, to let him tend me to let him take care of me. There's actually a lot of [00:05:00] debate about. Was the demeanor of the rich man selfish, or how did he view this relationship?

[00:05:07] And you could argue it different way. And trust me, biblical scholars have for many years, some point out that Lazarus was allowed to lay at the gate of the rich man and quote, receive crumb. But crumbs wouldn't have fallen from the table of the rich man all the way to the front door. So obviously the rich man was giving Lazarus handout or not chasing him away and giving him at least food.

[00:05:32] Now, of course he wasn't taking care of Lazarus. He wasn't healing him or helping him. He didn't invite him inside. So there was the rich man, a good man or taking care of Lazarus or was he not? And it's really not clear. But instead what's really seems to be addressed in this story. Is this idea of this Gulf or this chasm between the rich and the poor Jesus doesn't seem to be really talking [00:06:00] about was the rich man a good man was Lazarus a good man.

[00:06:04] He doesn't talk about the heart condition of either of these men. And instead he seems to be talking a little bit. The power disparate desperation or the wealth changes, how one of them has power and is rich in the world, but not in the afterlife and the other is switched. And in fact, it's unusual that Lazarus is named who's the poor man with no power, but the rich man is never given a name.

[00:06:34] He could be anyone. It may be that this is representing. That role of someone who loves money somebody who loves to be surrounded by wealth and privilege, even while those around them are suffering, he could be identifying that this role is filled by a gap or chasm in the real world [00:07:00] that I would say continues to be a problem today.

[00:07:04] And that gap is actually why Abraham calls out and says, I can't even send Lazarus to you to help if I wanted to, because this Gulf, this chasm between us can't be fixed in this life. It can only be crossed our closed in our life today. Jesus is calling on his listeners to pay attention to the Gulf that exists in our world.

[00:08:55] It should show up in what we do and what we say and how we act, not [00:09:00] just in the words that we speak. No, it's not really clear how this story. It ends. It's not really clear if Lazarus ever helped the rich man or if that was even possible. It's not even clear that the rich man really had seen Lazarus throughout the years, that Lazarus was in front of his gate.

[00:09:23] It's implied that he did because he knows Lazarus's name. And he actually calls out to Abraham and says sin Lazarus to me by name. But it's not really clear about what was in their heart. This is one of those times where it's saying what's in your heart should show up and what you do with your hands and your feet as well.

[00:09:48] Thanks so much for listening to the inspired stewardship podcast. As a subscriber and listener, we challenge you to not just sit back and passively listen, but [00:10:00] act on what you've heard and find a way to live your calling. If you enjoy this episode, do me a favor. Go over to facebook.com/inspired stewardship and like our Facebook page and mark.

[00:10:18] That you'd like to get notifications from us so that we can connect with you on Facebook and make sure that we're serving you to the best of our abilities with time and tips there until next time, invest your time, your talent and your treasures. Develop your influence and impact the world.

Besides all this, between you and us a great chasm has been fixed, so that those who might want to pass from here to you cannot do so, and no one can cross from there to us.' - Luke 16: 26