Episode 1105: Why Intentionality is Important to Your Money

Join us today for an episode about the need to be intentional with your money...

Today's episode is focused on why focusing on the amount of money rather than the intentionality is a mistake... 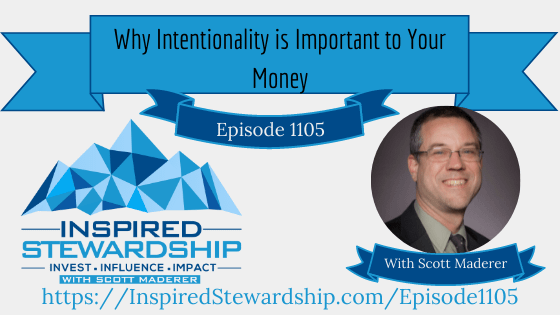 In today’s episode about investing in others through stewarding your treasures, I talk with you about why money is less about the amount and more about the intention.  I share why if you recognize what you want to say yes to it’s easier to let other things be a no.  I also talk about why there is always an opportunity cost.

Episode 1105: Why Intentionality is Important to Your Money

[00:00:07] Heather Heuman: I'm Heather hymen from sweet tea, social marketing. I challenge you to invest in yourself, invest in others, develop your influence and impact the world by using your time, your talent and your treasures to live out your calling.

[00:00:23] Having the ability to reach others is key. And one way to be inspired to do just that is to listen to this. The inspired stewardship podcast with my friend, Scott.

[00:01:20] We'll learn to invest in yourself, invest in others and develop your. So that you can impact the world.

[00:01:29] in today's episode about investing in others, through stewarding your treasures. I talk with you about why money is less about the amount and more about the intention. I share. Why, if you recognize what you want to say yes to, it's easier to let other things be a no. And I also talk about why there is always an opportunity cost with.

[00:01:49] As we talk about stewarding your treasures. Wouldn't it be great. If you could support this podcast and do it without costing yourself an extra dime. It turns out you can. [00:02:00] All you have to do is use inspired stewardship.com/amazon. When you're ready to make a purchase via Amazon and a small commission, we'll come back to support the show.

[00:02:11] If you enjoy the show, when you're ready to buy from Amazon, just use inspired stewardship.com/. One of the things that comes up again and again, when I'm working with people on their money, is this tendency to look at their money, just in terms of amounts, what's the amount of the income. What's the amount of the outgo am I overspending in this category or the other category?

[00:02:38] Or am I under spending in a certain thing? Do I need to make more money? Do I need to spend less money? It's all focused on the amount of. And one of the things that I try to get people to shift to is thinking about alignment in intention. Instead it's about ratios and intention more than it is about too much or too [00:03:00] little.

[00:03:00] We tend to make things into Al absolute as statements. That person spent way too much on the car that they bought, because it's more than you would have spent on a car that you bought. I have a past client that made incredible. He made multiple hundreds of thousands of dollars a month. He had seven different businesses.

[00:03:22] They all paid him. And generally, most months he brought home between a hundred to $200,000 a month. He made over a million dollars in income every single year. And he'd done that for several years. And he had this tradition where for his wife's birthday every year, he would buy her a brand new Cadillac.

[00:03:44] He'd just walk into the Cadillac place and he'd stroke a check and buy one for cat. And he could do that every single year. And people oftentimes would say that, oh my goodness, it's excessive. How can he buy his [00:04:00] wife, a brand new car every single year? What a wasteful thing to do with this. Now he did lots of other things with this money as well.

[00:04:10] He gave lots to charity. He did other things, started new businesses, employed other people and saved a lot and invested some, he did all sorts of good things with his money, but people would focus on this. The interesting thing is if you looked at the ratio of that income to his actual. Money. It would be like somebody who makes a hundred thousand dollars a year buying about a $6,000 car.

[00:04:37] Now that might be a lot to spend every single year on a car, but it would not be a brand new car. It would be a used car. And in fact it would probably be not the best used car on the market. It would probably not be the top of the line one. It would be one that simply was. A decent [00:05:00] car. And in fact, when he sold cars every year, he would sell that, that last year, his car and he would get some money back.

[00:05:07] So that would make it even quote cheaper every year. This was just something he did because he felt called to do it. And he felt that this was something that was worthwhile. And yet I saw people talk about how wasteful it was. But there were other areas where he was very tight and he would hold back on spending and not do much around certain areas because there were things that he had decided were a priority.

[00:05:37] And these were the things that he said yes to. And that made it really easy for him to say no to things that you are. I might look at it and say, oh, that's really important. You should spend your money there, but he didn't feel that they were. See, that's why the intention and the alignment is more important than the amount it's really about.

[00:05:56] Are you able to do with the money, the things that you feel [00:06:00] are most important. And did you do those things first? And if you did, then it's really easy to find other things and say no to those. Let those go. It's not about doing everything. It's about focusing on the right things, the most important things with your.

[00:06:20] Because here's the truth, no matter how much you make, there's always an opportunity cost. If he goes and buys that new car, every single year for cash for his wife, that means there's something else he can't do with that money every single year. And the same thing is true for you. If you do one thing with your money, you can't do something else with that same dollar with that same money, because there's always an opportunity cost.

[00:07:15] So what ends up happening instead is most people focus on all the things that they have to say. No. And my argument is instead pay attention to what you want to say yes. To first focus there first. And then if you still don't have enough money to do all the things that you want to say yes to, then yes, you need to figure out what else can I do?

[00:07:35] Can I make more money? Can I increase my income? Do I need to get training changed my job, all of these other things, but for me, Do you actually have enough money to do the things that are most important to you? Most of my clients discover that they actually do. It's not the things that they were saying yes to deliberately that were the problem.

[00:07:55] It's all the things that they were saying yes to, by default, without being [00:08:00] intentional with their money, that created the issues. So what can you do to say yes to the most important things and be intentional and line up your. With your intentions. Thanks for listening.

[00:08:51] And we'll send you five weeks of our best tips on stewarding your treasures until next time. Invest your time. [00:09:00] Your talent and your treasures develop your influence and impact the world.