Join us today for an episode about the gift of extravagent givingextravagant... 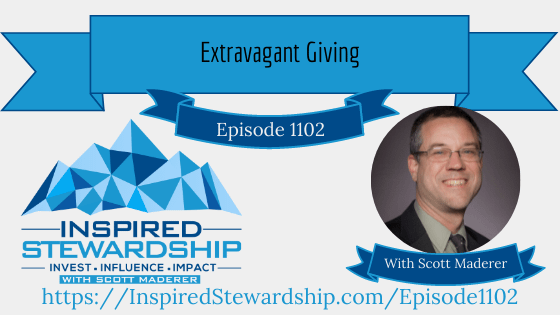 In today’s spiritual foundation episode about investing in others, I talk with you about John 12: 1-8.  I talk about the extravagance of giving.  I also talk about how we are called to give to all…

[00:00:07] Joe Schum: I'm Joe Shum from soul patch, hippo success coaching. I want to serve your journey to be the next version of you to be inspired, to become the most authentic. You listen to this, the inspired stewardship podcasts by my friend, Scott Mader every day can help you keep the focus.

[00:00:25] Scott Maderer: give to Christ. Give to your family, give to the poor, give to your friends give, and give some more. Give at a level that makes everyone look up and go. You shouldn't be. It's that giving with extravagance that I think we're being challenged to do welcome. And thank you for joining us on the inspired stewardship podcast.

[00:00:55] If you truly desire to become the person who God wants you to be, then you must learn [00:01:00] to use your time, your talent and your treasures for your true calling in the inspired stewardship podcast. We'll learn to invest in yourself. Invest in others and develop your influence so that you can impact the world

[00:01:16] And today's spiritual foundation episode about investing at others. I talk with you about John chapter 12 verses one through eight. I talk about the extravagance of giving and I also talk about how we are called to give. John chapter 12 verses one through it. It goes like this six days before the Passover Jesus came to Bethany, the home of Lazarus, whom he had raised from the dead there.

[00:01:44] They gave a dinner for him. Martha served and Lazarus was one of those at the table with him. Mary took a pound of costly perfume made of pure Nard, anointed Jesus' feet and wiped them with her hair. The house was filled with the [00:02:00] fragrance of the perfect. But Judas Iscariot, one of his disciples, the one who was about to betray him said, why was this perfume not sold for 300 denari?

[00:02:09] And the money given to the poor? He said the stop because he cared about the poor, but because he was a thief, he kept the common purse and use to steal what was put into it. Jesus said, leave her alone. She bought it so that she might keep it for the day of my burial. You always have the poor with you, but you will not always have.

[00:02:30] Now this passage is one of those that has some things in it that are a little confusing when you first look at them and I will admit there are things in there that always make me wonder exactly what the meaning of it is, but it makes me think about giving and receiving of gifts. Have you ever had a gift given to you that just took your breath away?

[00:02:58] One that made you [00:03:00] wonder how in the world did I deserve this? How did this person afford to give this to me? How did they know? It was something that I wanted. So I'm not talking about a gift that takes your breath away because it's so bad or even one that is just. Something that you can't figure out if they even knew you, but I'm talking about the extravagant kind of gift that makes you believe that there's no way that you deserved this.

[00:03:29] When you get given that kind of gift, you usually feel some embarrassment. You may feel some shame. You may feel bad for the giver are afraid that they've gone too far. You may be feeling a little bit of shame that maybe you didn't give a gift as costly or as extravagant. And often in that moment, what we say.

[00:03:53] As you shouldn't have now don't get me wrong. We use that as an expression often when we get a gift, [00:04:00] even out of a sense of false or real humility, because we often are using it to say oh, you shouldn't have, and we don't necessarily really mean it. But in this case, you're saying it and you actually really mean.

[00:04:15] When you get that kind of gift, you often almost feel like it's a burden to accept it because now you've got something you have to live up to. Sometimes it can even produce anger when someone gives you that kind of gift. And that's what seems to be going on here in. This story with Jesus, at least at some level, this is six days before Passover.

[00:04:42] That means it's five days before Jesus's death. And Jesus makes an explicit connection between this annointing that Mary gives him and his death and burial. Now, Mary probably didn't really see this as giving it to him [00:05:00] because of his upcoming day. Instead for her, it was this pouring out of self and soul.

[00:05:07] It was an act of surrender. It was an act to show that she cared for and loved Jesus diff deeply, probably was in response as well to the resurrection of Lazarus, someone else who she felt deeply about it, it was this connection to Jesus being shown in a physical. And Jesus, apparently doesn't really think about the cost either.

[00:05:34] Instead he recognizes this as the emotion behind the gift, he gives the response that we should be given when we're given that sort of an extravagant gift, which is thank you. At this point it appears that John in this story is using. To illustrate the upcoming sacrifice that Jesus is going to [00:06:00] make.

[00:06:00] And to even make an analogy here with that upcoming sacrifice this whole passage, it talks about Martha and her being a servant, her serving. And then in Matthew's version of this anointing, there are disciples present who complain and in John's version, he calls it out specifically to Judah.

[00:06:49] And here there's a passage about pouring it over his feet. And well, Luke has a story where Jesus, his feet are wiped by a [00:07:00] woman's hair. So maybe this sort of event was a regular occurrence. That was going on a lot of different times, or maybe these are all different views of the same event, but regardless.

[00:07:34] Maybe John even had that thought in his head and maybe he even felt somewhat guilty about it himself. Maybe this idea of wastefulness is something that the disciples had talked about. Jesus seems to be a man who knows the cost of everything, but the value of nothing. He just looked at Mary and was thankful, [00:08:00] but maybe John says others were being jealous of this in a way it's maybe there was some guilt going on.

[00:08:11] And John was putting words in other people's mouths. Maybe even those that he thought. And Jesus actually points out that this gift is not wasteful because it was given and love. No act of service can be given, be shameful if it's given out of that love reaction. And then of course, there's that last verse.

[00:08:56] In fact, I think some people seize upon those words as [00:09:00] well and say that this is why we should give Jesus everything and that the leftovers can be used to serve the poor, but I don't think that's really. What's going on in this verse, don't get me wrong. I think it's a troublesome verse at some level, but for me, the way I read it is that it's not, don't give to the poor, it's give to every one with this sort of sacrifice, sacrificial love, give to Christ, give to your family, give to the poor, give to your friends give, and give some more good.

[00:09:39] At a level that makes everyone look up and go, you shouldn't have it's that giving with extravagance that I think we're being challenged to do. Thanks for listening.

[00:09:55] Thanks so much for listening to the inspired stewardship podcast. [00:10:00] As a subscriber and listener, we challenge you to not just sit back and passively listen, but act on what you've heard and find a way to live your calling. If you enjoy this episode, do me a favor. Go over to facebook.com/inspired stewardship and like our Facebook page and mark.

[00:10:25] That you'd like to get notifications from us so that we can connect with you on Facebook and make sure that we're serving you to the best of our abilities with time and tips there until next time, invest your time, your talent and your treasures. Develop your influence and impact the world.

Mary took a pound of costly perfume made of pure nard, anointed Jesus' feet, and wiped them with her hair. The house was filled with the fragrance of the perfume. - John 12: 3