Join us today for an episode about the reason that gifts are about unity through diversity... 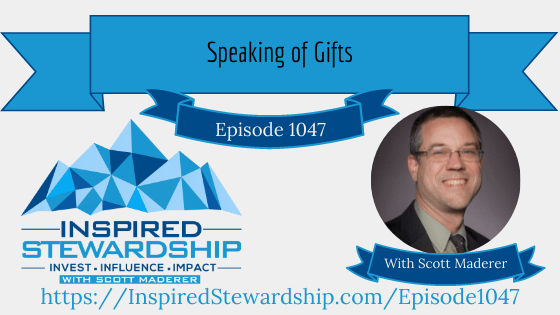 In today’s spiritual foundation episode about developing your influence, I talk with you about 1 Corinthians 12: 1 – 11.  I share why the listing of the gifts isn’t what we treat it as.  I also share why this passage is about more than calling out gifts…

[00:00:06] Roy Heintz: Roy Heights. I challenge you to invest in yourself, invest in others, develop your influence and impact the world by using your time, your talent and your treasures to live out your calling. Having the ability to lead like a coach is key.

[00:00:24] And one way to be inspired to do that is to listen to the. The inspired stewardship podcast with my friend,

[00:00:32] now I'm sure that disunity is not a problem that you at all recognized in the modern church, if you're a member of the church, but it was the core issue of the time then in cornea. And let's be honest, I'm making a joke. Of course, it's still a big issue in churches today. Welcome and thank you for joining us on the inspired stewardship podcasts.

[00:00:59] [00:01:00] If you truly desire to become the person who God wants you to be, then you must learn to use your time, your talent and your treasures for your true calling in the inspired stewardship podcast. We'll learn to invest in yourself, invest in others and develop your infant. So that you can impact the world.

[00:01:21] And today's spiritual foundation episode about developing your influence. I talk with you about first Corinthians chapter 12, verses one through 11. I share why the listing of the gifts in this passage. Isn't what we sometimes treat it as. And I also share why this passage. Is about more than calling out gifts.

[00:01:41] First Corinthians chapter 12 verses one through 11 says now concerning spiritual gifts, brothers and sisters, I do not want you to be uninformed. You know that when you were pagans, you were enticed and led astray to idols that could not speak. Therefore, I want you to understand that [00:02:00] no one speaking by the spirit of God.

[00:02:37] To another, the working of miracles to another prophecy, to another, the discernment of spirits, to another various kinds of tongues to another, the interpretation of tongues, all of these are activated by one and the same spirit who allots to each one individually, just as the. Chooses now, this is one of those passages that [00:03:00] if you're in Christian circles, you've probably heard whenever you've had someone preach or teach or had a course on spiritual gifts.

[00:03:10] And a lot of times we treat this as a listing of the spiritual gifts. It even starts now concerning spiritual gifts, brothers and sisters. I do not want you to be uninformed. This a pistol is. Of several letters. That's why it's called an epistle that we're sit through the church in cornice during the early days of the church.

[00:03:56] It was a hard place to be a [00:04:00] Christian and be a follower of Jesus. In those early days, it was hard to maintain purity and hard to stay out of the mercantile and the dog eat dog and the different types of activities that were going on in the surrounding community. And in fact it's evident by the letters and the content of these epistles that some of that stuff leaked into the church.

[00:04:25] And they basically believe that there were so many of these different letters back and forth between Paul and the church to address issues in the early church. And it didn't necessarily go into all of the issues that the church was having, but from Paul's perspective it over and over again, highlights one particular central problem that perhaps is leading to many of the other problems.

[00:04:53] And that problem is disputing. Now I'm sure that disunity is [00:05:00] not a problem that you at all recognize in the modern church, if you're a member of the church, but it was the core issue of the time then in Corinth. And let's be honest, I'm making a joke. Of course, it's still a big issue in churches today.

[00:05:17] And this moment of talking about giftedness was actually from the perspective of creating unity. If you listen to the passage over and over, Paul says there are very varieties of this. There are different varied ways of this, but they all come from one source. They're all the same at their root that there is diversity.

[00:05:45] But also unity that there was individuality, but it was in the pursuit of oneness. This isn't saying that the individual doesn't matter or the individual should be wholly subsumed [00:06:00] into the whole. But rather is saying that out of giftedness, we seek to serve others and be in relationship with them, not in domination over them, that each of us are given the manifestation of the spirit for the common good.

[00:06:21] It comes. The source is from God. And the result is relationship. If it's only result is your aggrandizement, then it's not really working the gift the way you're supposed to. He talks about gifts. He talks about services. He talks about activities as if they're the same thing, but with different names or they're a way of talking about some sort of common experience.

[00:06:52] The problem that was being addressed in the church in Corinth was the feeling that there were certain gifts and certain people that were [00:07:00] superior to others. These people were the super Christian. And Paul is trying to knock the legs out from under them and level the playing field a little bit and saying just because you have the gift of prophecy or the gift of tongues or the gift of wisdom, doesn't make you any better than anyone else that if you're engaging in activities, if you're providing service to others, you are motivated out of the spirit.

[00:07:32] And that is. Even at the simplest of their actions, still empowered by the spirit that the act of serving others was a response to being driven by the spirit. It's really evident that Paul is calling for unity. Out of this [00:08:00] diversity rather than holding up certain gifts and saying these are better than the other ones.

[00:08:06] Paul is saying, you didn't get those gifts on your own. You didn't wrestle that whole godly thing into position yourself. Rather, they came to you through the spirit, just like we are called to work on our own salvation and work on our own path and work on ourselves. But at the same time, We have to recognize that the spirit is what is serving and living and growing behind us and within us and allowing us to move forward.

[00:08:40] This sort of drive about the spirit is even called out when he says no. Speaking by the spirit of God ever said, let Jesus be cursed. Maybe there was something going on in particular, in the church of corners that made that phrasing important. But really Paul seems to be [00:09:00] saying, if at the end of the day, the spirit is about unity and relationship and coming together, it's about building up the body and if you're not doing that, then you're tearing the body down.

[00:09:12] And that is not of this. If you run through this list, Paul is calling out gifts that have to do with the minds and the hearts of the congregation. He talks about the variety of gifts there. He talks about wisdom and knowledge and faith. He talks about healings and miracle and prophecy and. And he talks about speaking in tongues, but he's not really trying to give an exhaustive list of all possible gifts that you could have, or that could exist.

[00:09:46] Instead. He's calling them out and saying, here are some examples, here are some moments that you can use as an example of how you are called to serve and to be active and to [00:10:00] build a relationship and to create unity within the church. Thanks for this.

[00:10:06] Thanks so much for listening to the inspired stewardship podcast as a subscriber and listener, we challenge you to not just sit back and passively listen, but act on what you've heard and find a way to live your calling. If you enjoyed this episode, do me a favor. Go over to facebook.com/inspired.

[00:10:30] Stewardship and like our Facebook page and market that you'd like to get notifications from us so that we can connect with you on Facebook and make sure that we're serving you to the best of our abilities with time and tips there until next time investor. Your talent and your treasures develop your influence and impact the world.